Kirby (tentative title) is the newest title in the Kirby series, developed as a joint-project between GD Gaming Studios and HAL Laboratory. This is the second Kirby game to be developed by GD Gaming Studios, as well as the very first game in the main series to be fully playable in 3 dimensions. The game is currently scheduled for a late 2018 release on the Nintendo Hypercube.

The story begins with Kirby running through a library in King Dedede's castle. Eventually, he makes it to the top floor, where some Waddle Dees and Meta Knight are seen reading books. However, his carefree nature ends up with him running right into the King himself alongside his trusty assistant, Bandana Dee, knocking them all down. Dedede and Bandana Dee manage to recover from the incident, but Kirby ends up being unable to keep his balance as he falls again and begins to roll backwards.

As Kirby continues to roll back, a large tremor occurs as the others all fall, with the library beginning to tilt backwards. Bookshelfs fall and the Waddle Dees panic as the castle continuously begins to fall back. As the quake begins to calm down, Kirby flies out the castle window to see what's going on, followed by King Dedede, Meta Knight, and Bandana Dee.

Once the heroes reach safe ground, they look up only to find that the sky is darkened by a massive floating object that seems to be using gravitation energy to pull Pop Star into its grasp. As they watch the effects of this gravity pulling Pop Star's ground apart, Kirby decides to be the hero and fly up to the ship. Calling over his Warp Star, he flies off in search of a way to soar across space and stop Pop Star from being brought out of orbit.

Kirby (tentative title) stays mostly true to the classic Kirby formula established in past games while trying something new through the 3-dimensional layout. The goal of the game is largely the same, with players controlling Kirby to reach the end of a stage using his powers or Copy Abilities to defeat enemies and solve puzzles. Kirby can still perform many of his standard abilities, such as his Inhale, Star Spit, floating, Air Bullet, Guard, Dodge, and Slide.

Of course, due to the shift towards 3D gameplay, some changes have been made. For example, Kirby can now only fly a certain height above whatever platform he jumps off of, replicating a feeling similar to the Air Meter from Kirby 64. The pointer option from Kirby 3D Challenge also reappears to help position players when they attack. In addition, to accomodate towards beginner players who may be lost in an open environment, a new Door Meter can be used to activate a counter that lowers as Kirby approaches his destination. The Door Meter and Pointer can be turned on and off at anytime, which can affect the difficulty of the game.

Classic Kirby collectibles also make their return. The main collectible is the Star, which come in different colors that stand for different monetary values. 1-Ups, Invicibility Candies, and Mint Leafs (Sweet Potatos in the Japanese version) all make appearances as well, with the latter being slightly modified to allow Kirby to float infinitely and to any height alongside the ability to spout a stream of Air Puffs.

Kirby's trademark copy abilities also make an appearance in Kirby (tentative title) where they can be obtained by swallowing enemies or jumping into Copy Pedestals. Many of the returning abilities have had their abilities or controls slightly modified to accomodate the fact that they now function in a 3D environment. In addition, there is a slightly lower amount of returning abilities than usual, in order to make room for a total of 7 brand-new abilities that make their debut in this game.

The main new addition to the game is the ability to control the Warp Star. After defeating a villainous UFO in certain levels, the Warp Star will be unlocked to travel through the havoc caused by the miniboss. Due to the gravitational effects caused by the UFO, riding the Warp Star is nowhere near as fast as it normally would be, but can jump and hover to cross large gaps. Kirby's basic attack on the Warp Star is a chargeable projectile, which can shoot through walls.

Of course, Kirby can also swallow his enemies to copy their powers. Kirby gains one brand new attack when on the Warp Star, such as a burning dash with Fire, a whirlpool projectile with Dolphin, and a gliding attack with Parasol. Although using the Warp Star is mandatory to clear through some levels, using abilities are often less necessary and used for puzzle solving or extra collectibles. In some safe areas, Kirby can also park his Warp Star and leave his current ability behind to suck up a new one. Using double abilities is key to making it through some areas.

Story Mode is the main mode of the game and where the majority of the play time will likely be dedicated. In this mode, up to 4 players can join in as differently-colored Kirbies on a quest to stop Pop Star from being stolen by mysterious invaders. Players travel through multiple stages within the set number of levels to reach the final boss.

After clearing Story Mode once, the modes Helper to Hero and The Arena will be unlocked.

Helper to Hero is an advanced version of the Story Mode with a focus on Bandana Waddle Dee. Hoping to get his fair share in the spotlight, Bandana Waddle Dee sets out on his own to help King Dedede gain intel on the new invaders. Bandana Waddle Dee attacks with his Spear but has some unique moves, as well as the ability to partner up with enemies he defeats for support, allowing for up to 4 players to team up this way. Helper to Hero is a much harder version of the main campaign, featuring tougher enemies and bosses as well as less healing items.

The Arena is a boss gauntlet that pits players against all of the bosses and minibosses within Story Mode consecutively. Players are given the option to pick an ability of choice at the start, but will recieve limited healing items and ability choices throughout the rounds. Although up to 4 players can take on The Arena at once, it should be noted that bosses have much more health as a result.

After clearing Helper to Hero once, players gain the ability to view their best completion times and ability usage. In addition, clearing The Arena will unlock The True Arena as well as provide the option for Bandana Waddle Dee and the Helpers to battle if Helper to Hero has already been completed.

The True Arena is the ultimate test of skill, pitting players against all of the bosses and minibosses within Helper to Hero consecutively, and adding in secret boss fights as well. Players are given the option to pick an ability of choice at the star, but will recieve extremely limited healing items and a single ability throughout the rounds. Although up to 4 players can take on The True Arena at once, it should be noted that not only do bosses have much more health as a result, but if a single player is defeated, everyone is kicked out and must try again.

After clearing The True Arena, players gain the ability to view their best completion times and ability usage, as well as play as Bandana Waddle Dee and the Helpers.

There are a total of 32 abilities that can be used in Kirby (tentative title), which is the highest amount in the series; if Warp Star abilities are counted seperately, this number doubles to a whopping 64 abilties, but this section only lists Copy Abilities available to Kirby. Out of the 32 abilties, 7 of them are stated to be brand new. Below you can find a collection of every present Copy Ability. 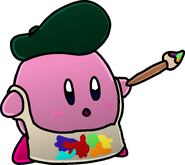 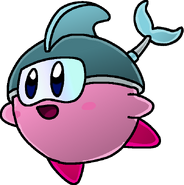 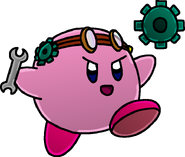 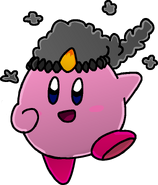 Vapor Kirby.
Add a photo to this gallery

Retrieved from "https://fantendo.fandom.com/wiki/Kirby_(GD_Gaming)?oldid=2159574"
Community content is available under CC-BY-SA unless otherwise noted.