Kirby: United is an RPG for the 3DS and Wii U. Because it is made for a younger audience than most RPG's, it has relatively simple mechanics and forgiving gameplay. The game covers most of the Kirby franchises history, and in a departure from past titles, predominantly features Kirby's helpers rather than Kirby himself.

The full story can be found here.
The game begins at dawn when a mysterious object crashes onto Mt. Dedede. Kirby sees the crash from a distance, and rushes in to help. He meets up with King Dedede and Waddle Dee, and Meta Knight shows up shortly afterwards. The four move in to identify the object, which appears to be a large glowing crystal. The gem flashes and floats off the ground as they approach it, prompting the group to attack. The object is beaten after a short battle, and Kirby eats it before it can escape. With the crisis seemingly resolved, the King throws an impromptu banquet for the heroes. Kirby enjoys it at first, but quickly becomes ill, eventually passing out.


When he recovers, he has been transformed into a crystal similar to the one he ate, and he finds that Dreamland has been taken over by a hostile force of data creatures and possessed helpers, led by what seems to be Kirby himself! With the help of three rogue helpers, Kirby must save his friends, destroy the crystal forces, and get his body back!

Just like previous entries, Kirby United has a variety of game modes to choose from. At first only the main story mode is unlocked, but more modes will be unlocked as the game progresses.

This game mode follows the central story of the game, allowing the player to take control of Kirby's helpers to explore and battle. The overworld is split into several levels, which are connected either to a hub area or to each other. To complete each level, the player must traverse the area, defeating enemies they meet, completing challenges and puzzles, and defeating the bosses in the area. Many levels also have helpers and allies to defeat, allowing them to join your team.

Once the Main Adventure is complete, the player will be able to play through the game again, this time under different rules. These new modes don't have a story, but follow the same levels as the main story mode. Each mode has a different final boss.

After finding Kirby's game system, the player can access additional sub games. Only a couple are available at once, but game cartridges can be found in story mode to unlock more. Completing each sub game on its hardest difficulty level will unlock additional super moves, items, or skills in the main game. Each game has both a single player and multiplayer mode.

Battles are fought in a mostly traditional turn-based system, while incorporating some action commands. Each battle has the same basic objectives- defeat all enemies, keep each helper alive, and keep Kirby safe. Turns follow a set pattern:

When on the offensive, each helper can choose between 3 move types- standard and special. Standard moves work the same as in most RPG's, with damage output and success rate determined primarily by the helper's stats, as well as the move's properties. Other factors, such as the enemies size, defenses, and position, should also be considered. Special moves instead require action commands to successfully execute. There are three different types, each used by a specific class of helper:

Just like helpers, enemies can use standard and special attacks. When defending from standard attacks, the amount of damage taken is determined by the helpers defense and evasion, as well as their size and position. If the helper used a defensive move instead of attacking, they will take less damage, or even avoid the attack completely. When defending against special attacks, the means of avoiding it is determined by the type of attack:

During battle, each helper, ally, and enemy unit has six stats to keep track of:

In addition to these six numerical stats, there are three other factors to consider. These factors are only used on higher difficulties, and can be disabled for a simpler experience. There are:

Much like other RPG's, there are a variety of status effects that can be inflicted on fighters during a battle. While most of these effects are primarily negative, many can be used advantageously by certain units. There are 21 status effects total:

Each time an enemy is damaged or defeated, the data meter fills up. For as long as it is full, it enables a passive buff to helpers Kirby is set to, determined by their class type. Elemental helpers gain a 1.5x damage boost, Weapon helpers gain a 2.0x critical rate, and Skill helpers gain an extra turn. Alternatively, Kirby can use a Star Rush attack when the meter is full. He starts out with just one, but gains access to more over the course of the story. Some are hidden as rewards for clearing subgames, and are usually themed after the game they are found in.

Most of the party members the player will recruit are helpers. Each one uses moves from Kirby's various abilities.

The overworld is divided into several connected levels, each based on locations from past Kirby games. Helpers can be moved around these environments using the circle pad; pushing the pad farther will move them faster. Helpers can also jump using the Y button. Some helpers can perform mid air jumps, hover, or fly for short distances.

Objects such as doors and chests can be interacted with by pressing the A button. Pressing the Y button performs a helper-specific move, which can be used to attack enemies or use special stage elements. Allies can also interact with certain objects by pressing A next to them. The current helper can be changed with the trigger buttons, cycling between the three current helpers. Teams of 3 helpers can be saved ahead of time, and quickly chosen from a menu by holding both trigger buttons at once. The full helper menu can be opened with the B button.

The select button opens the inventory, and the start button pauses the game. While the game is paused, the player has access to several functions:

Several levels contain Kawasaki Houses- the areas surrounding these houses are always free of enemies and hazards. As implied by the name, Chef Kawasaki can be found here, and for a fee he will cook food for the team, or provide special healing items. Newly visited houses also contain a limited supply of free healing items. Kawasaki Houses also contain telephones, which can be used to switch the current ally- the only way to do so outside of Hub Levels. If there are multiple houses in a given level, they can be warped between using Switch Stars for faster travel. Last but not least, they contain save points.

Several Hub Levels are found throughout the game. These levels are usually towns or airships populated by NPC's. Each level contains a Kawasaki House (or a similar establishment), a warp room (which can be used to travel quickly between Hub Levels), and various stores selling weapons or gear. Different hub levels also contain unique areas- for example, the Halberd contains a training room, and the Squeak Airship has a store where special treasures can be sold.

A variety of items can be used to make battles a little easier. Items are stored in the team inventory, and can be accessed during the planning phase of battles. Items fall into three classes: Foods, Weapons, and Summons. Food restores health, while also imparting passive status buffs; Weapons deal powerful damage to enemies, similar to Special Attacks; Summons unleash massive damage to enemies on par with Kirby's Super Attacks.

There are also a few entrees that Chef Kawasaki can create using these foods as ingredients. In addition to a stronger healing effect, entrees also grant all the stat increases of the individual ingredients.

Lastly, there are six rare foods that have additional bonuses.

Weapons can be used in battle to deal more damage than would normally be possible. Weapons require require simple inputs to use properly, similar to special attacks. Weapons are based on various media from the Kirby Series.

Each helper can hold a single item designed for summoning. When used, summons will attack in place of the helper for that turn. There are three main types - Keychains summon bosses to deal high damage to several enemies, but have a long cooldown period. Kurata Cards summon weaker enemies and midbosses to attack a single enemy, but have shorter cooldown periods. Lastly, Paintings summon allies to grant temporary bonuses to the team or helper, and have the shortest cooldown. There are also special Trophies, which can only be gained through secret battles in Candy Constellation - these deal even more damage than keychains, but are limited to one use per battle.

Wester (Whip)
Add a photo to this gallery

Full Ally Spread
Add a photo to this gallery

The Teaser for Kirby: United. 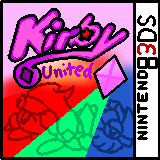 The Wii U boxart
Add a photo to this gallery
Retrieved from "https://fantendo.fandom.com/wiki/Kirby:_United?oldid=2719779"
Community content is available under CC-BY-SA unless otherwise noted.