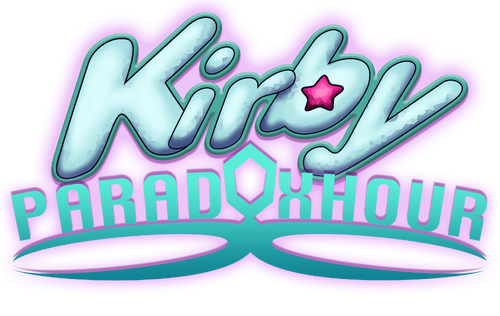 Kirby: Paradox Hour is the next adventure in the Kirby series, directly following Kirby: Android of Death.

"It is a cool, clear night in Pop Star. All across the peaceful countryside, Dreamland's residents are fast asleep, doubtless enjoying sweet dreams. Adeleine dreams of creating wondrous masterpieces, King Dedede envisions massive feasts worthy of his rank. Even the vigilant Meta Knight is getting some shut eye, though what dreams he has - well, it is difficult to say.

It would seem that all of Dreamland's residents are fast asleep - except for one. Kirby, the young hero of Dreamland, Pop Star, and the known universe, is busy preparing a midnight snack. Not an unusual occurrence for him, given his appetite. He quickly enjoys his fourteenth meal of the day, and settles into bed once more.

...except, he seems unable to fall asleep. Off in the distance, the faint sounds of some sort of procession interferes with his rest. Wondering what the fuss is, Kirby steps outside his house. He notices Waddle Dees, Broom Hatters, and other familiar faces walking towards the horizon, but there is something off about them. They seem to still be asleep! They are headed towards lights and music somewhere in the distance ... a party? At this hour? Kirby heads out to investigate, little knowing that this strange occurrence is the start of a wild new adventure!"

When strange forces threaten the peace of Pop Star, you can count on Kirby to save the day! But this time, he's going to need some help. Nothing can stand in the way of this dream team!

Kirby and company must traverse many strange and treacherous worlds to uncover the cause of the sleepwalking on Pop Star. Each planet they visit consists of a few interconnected levels, which are travelled through directly rather than through a world map.

Kirby can traverse levels freely to the left and right, and has unlimited jumps to reach the most distant heights. New to this adventure, Kirby can also move along the Z-axis, although in a somewhat-limited manner. Levels are laid out like wide hallways, with much more length than breadth - regardless, this new layout means some levels require a non-linear approach to complete.

Kirby and his friends have the moves to defeat any foe they encounter. Just like always, they can execute a variety of special moves, which work in much the same way despite the new level structure. Most attacks are only active on the plane the character is currently on, unless it homes in on foes or is an area-of-effect technique. This applies to the enemy's attacks as well - the heroes must use this fact to their advantage if they are to succeed!

Discover all the available abilities here!

Every hero has access to certain abilities to complete their quest. Kirby can utilize all 35 available abilities by inhaling foes that can use them - however, he might lose his ability if he takes too much damage at once. Adeleine, Meta Knight, and King Dedede are limited to a single moveset derived from three abilities each, but will retain them at all times; some of these abilities are exclusive to their moveset, meaning Kirby can't use those moves at all!

Abilities control a little differently in the new control scheme, and many have received new moves! All abilities, new and old, have a powerful new Star Technique - a finishing move that can be used after taking or dealing enough damage. With these devastating techniques, our heroes can plow through boss fights, solve puzzles, and open secret areas!

Kirby has access to 4 brand new abilities in this adventure - Jewel, Desert, Cyber, and Chrono - in addition to 31 returning abilities! Of course, Kirby's allies can also use their own unique abilities: Adeleine wields Painter, King Dedede wields Monarch, and Meta Knight wields Galaxia.

Facing off against the defenders of Dreamland is the HELIX Researcher's Guild! This institution was founded by the Calamitans, a race of highly intelligent squid people. They have constructed strange Clock Towers not only on Pop Star, but several other planets as well! At the head of the operation are a team of five genius scientists: our heroes will no doubt engage them on their adventure. Whatever could their motive be? Perhaps their Observation Logs will reveal the answer...

Detailed descriptions of each planet Kirby and company visit can be found here.

As Kirby and his friends pursue the HELIX scientists across the galaxy, they will visit multiple unique planets that have been overtaken by the guild. Each planet contains multiple connected levels; solving puzzles or clearing objectives in one level may grant access to another, or reveal secrets. To get around more easily, Kirby can summon the Warp Star and quickly travel to the start of any previously accessed level. He can also save a landing point in his current room, and return to it later once he has unlocked a path or gotten a new ability - keep in mind that only one landing point can exist on a given planet!

On their journey, the heroes will encounter three major collectibles: Lore Sheets, which are scattered about and quite common; Dream Catchers, strange devices which must be destroyed to reach the world's boss stage; and Observation Logs, which are a considerably rare and harder to find.

Along their journey, Kirby and company will do battle with many powerful foes. Bosses will make use of the entire arena - creativity is key to counter their techniques! Bosses come in 5 different classes:

Retrieved from "https://fantendo.fandom.com/wiki/Kirby:_Paradox_Hour?oldid=3263120"
Community content is available under CC-BY-SA unless otherwise noted.