Kirby: Event Horizon is an upcoming Kirby game for the Wii U. It is to be released on 2017.

The game introduces a fully three-dimensional plane for areas for the first time, while past Kirby games were always sidescrolling platformers. As in Kirby's Return to Dream Land and Kirby Triple Deluxe, the game also features a special, strong ability that is often required to be used to progress in the game, known as Void.

The game takes place on a three-dimensional plane, which has not been seen in a Kirby game before. The concept is partially inspired by the cancelled Kirby GCN.

Another feature is the inclusion of 4 player characters as in Kirby's Return to Dream Land, taking the same 4 characters. Instead of being limited to only Kirby in single player mode, the player may now choose any of the 4 characters before starting a level.

Four playable characters are featured in Kirby: Event Horizon, being the same four that were playable in Kirby’s Return to Dream Land. However, in this game, the player may choose any of the four to play as instead of being forced to play as Kirby for player 1, etc. Every character has their own strengths and weaknesses, and some of these may be required to reach special locations or treasures.

Void Kirby is a major, new, special ability that Kirby can use occasionally throughout the game. It is similar to Hypernova, Robobot Armour, or the Super Abilities, in that it provides Kirby of a great strength that he needs to use to progress through certain parts in specific stages. The Void ability can collide with regular enemies and absorb their abilities, which will give Void Kirby new mixed abilities. 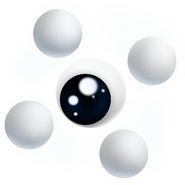 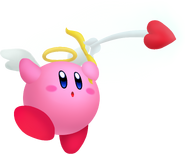 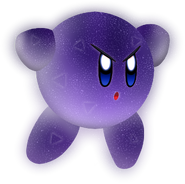 Void
Add a photo to this gallery
Retrieved from "https://fantendo.fandom.com/wiki/Kirby:_Event_Horizon?oldid=2186778"
Community content is available under CC-BY-SA unless otherwise noted.