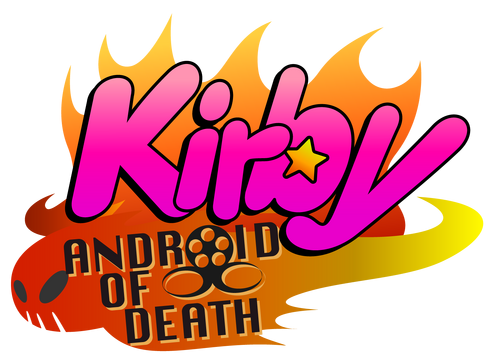 Kirby: Android of Death is a platformer released on the Nintendo Switch, following in the steps of recent games such a Planet Robobot and Star Allies. It is also a prequel to an upcoming Kirby game, Kirby: Paradox Hour. The game was completed and published on May 5th, 2018.

Planet Pop Star is visited by an extraterrestrial android, who has begun setting up bases and releasing destructive machines. With her motive being unknown, Kirby must set out on his own to find out her end goal and stop both her machines and the regional threats she has unleashed.

Full plotline and cutscene descriptions can be found here.

Android of Death retains most of the gameplay elements introduce in Return to Dreamland, but puts greater emphasis on combat than previous entries. In so doing, the game plays like a hybrid between a standard platformer and a beat-em-up. Kirby's basic movement and abilities have been changed to fit the new pseudo-3D control scheme, but the moves themselves are mostly unchanged. Since

One addition made to support this dual-gameplay style is Star Power, represented by a power meter that fills as Kirby deals and takes damage. When it is full, Kirby can execute a powerful Star Technique by pressing

. Each ability has a unique Star Technique that functions as a finishing move. These moves also have context-sensitive applications that can be used to solve puzzles and open alternate routes.

In a departure from past titles, each world in Android of Death consists of a giant map made from interconnected levels; rather than entering a golden door at the end of a level, a new stage picks up right where the previous one ended. Some levels have split paths, and will lead to multiple levels. The path connecting two levels goes through a safe room; from these areas, Kirby can fast travel to any other safe room with the Warp Star. Even outside these areas, Kirby can travel to one of them, and can choose to leave a spawn point behind - he can fast travel to that specific point from the safe rooms at will. Only one spawn point can be active at a time.

Levels are laid out as wide hallways, allowing Kirby to move a little along the Z-axis. Most of Kirby's attacks are still restricted to the X-Y plane he is on, but this isn't the case for all of them: some can home in on foes or be guided in 3D space, while others cover a wide area around or in front of him. Kirby can still access various techniques for abilities through the traditional button combinations.

The primary collectable in this game are Mix Discs, which contain remixes of past Kirby tunes to play in the Jukebox. Each level contains 3 hidden Mix Discs: the specific songs found in each level can be found under Mix Disc Tracks. Each world also contains one secret level, containing sections similar to the Challenge Rooms from Return to Dreamland, requiring mastery of four different abilities to complete. Clearing these challenges and defeating the Ultra mid-boss at the end rewards the player with one of five Cover Pieces, fragments of the cover of an ancient book. The cover itself isn't used until the following game, but collecting all 5 unlocks a secret ending cutscene.

Android of Death has many different types of bosses. Mid-bosses are encountered in the middle of each world; unlike past titles, each is fought only once. World Bosses are fought at the end of each world, and are tougher, multi-phase battles against powerful foes. Both types of bosses have Ultra variations, fought on higher difficulties of Star Warrior Way. The Ultra versions of the mid-bosses are also encountered in the world's secret stages. There is also a secret mid-boss encountered in the main game, and a secret final boss fought only on the hardest difficulty of Star Warrior Way.

There are two main subgames in Android of Death. The first is Mecha Defenders , a 3D fighting game, and the second is Star Warrior Way , the usual boss rush mode.

Kirby mans a robot suit to battle various mechanical menaces! Each level takes place in a larger mech on a grander scale.


Mecha Defenders is a 3D fighting game starring Kirby and Mecha Kirby, a machine similar to the Robobot. The goal of each match is to defeat the boss monster as quickly as possible, while maintaining Mecha Kirby's health and energy.

Mecha Kirby has a few basic attacks. It can execute a close range punch combo or a long range rocket punch with

, and charge a giant laser by holding

will make the mech jump, and it can hover for a short time by holding

. The mech dashes with

, and can block with

Mecha Kirby has both health and fuel. The machine self-repairs, so its health is always refilling, but if it takes significant damage it can lose all its health. It will be left vulnerable while it heals up again, which also costs lots of energy. The mech loses fuel gradually at all times, and every move costs energy to execute. Some use more than others, with the charged laser consuming the most energy. If Mecha Kirby ever runs out of fuel, Kirby automatically fails the mission.

During a battle, Mecha Kirby can clash with a variety of attacks: in these situations, Kirby can perform certain inputs to gain the upper hand:

There are a total of eight bosses in the game. Upon completing each battle, Kirby is given a medal rank based on how much health and energy he had remaining, how fast the battle was won, and how much damage Kirby did to the environment (the more the better!). The possible ranks, from worst to best, are Bronze, Silver, Gold, and Platinum (with a lower Copper rank if Kirby fails the mission). In order to battle the last boss, each of the previous seven must be beaten with at least a Silver rank.

The difficulty level determines how many foes will be fought in each round, whether they appear in their regular or ultra forms, if the game's secret bosses will be encountered, how much health Kirby has, and how many healing items are available between rounds.

LiSA
Add a photo to this gallery

Ice Dragon Ultra
Add a photo to this gallery

Celestial LiSA
Add a photo to this gallery

Neo Codeus
Add a photo to this gallery
Retrieved from "https://fantendo.fandom.com/wiki/Kirby:_Android_of_Death?oldid=2853690"
Community content is available under CC-BY-SA unless otherwise noted.