Kirby's Theme Park will be released for the Wii U in February 2015. This game introduces the Star Shop, My Kirby, and more.

Kirby's Theme Park is a 2.5D platformer featuring Kirby and his friends!

Kirby's Theme Park brings back lots of old features but also includes some new ones!

You can buy various items using small stars that you can find in levels and in minigames. You can buy acessories, Spray Paints and more!

Your own little puffbal to take care of! Isn't it adorable! You can choose the colour, name it, give it acessories, feed it, play with it, customize its play area and control it in Free Play mode!

The Arena is obtained automatically when you beat Galacta Knight, while The True Arena is unlocked after you reach Mount. Tamale.

Now there are 3 new Arenas, and a returning one, The Arena EX wich is unlocked the same way as normal but in EX Mode, and The True Arena EX wich is unlocked once you reach Mount. Tamale in EX Mode, and now, if you beat all of the normal Arenas (True Arenas not required) you get Dedede's Army's Final Test, where you play as minions of the Dedede Army as you fight through The Arena!

And the new Arena is Defending The Rod wich is unlocked by beating The True Arena, in wich you have to play through The Arena, BUT you can only use Star Rod Kirby.

Kirby and friends are doing their usual stuff when suddenly they notice a giant theme park behind them! Wait, what? They go inside to see what's going on, and they notice that.....everything's fine...yeah, everyone is confused as to what happened but they're ok, since there's no problem to be seen, the friends decide that they should relax, so they decide to buy some strange free tickets, when Meta-Knight says it's too suspicious, so they make fake tickets and they give them to a Waddle Dee with a funny mask, who is in charge and run into the amusement park. When they're gone the Waddle Dee's image flickers until he is pitch black with glowing green eyes.

The gang enter the park and all are stunned by its beauty, when suddenly, the strange Waddle Dee jumps and...flies!? Then he reveals his true form, Galacta Knight! and then snaps his fingers, making everyone who bought a ticket fall unconscious (except the gang because the made fake ticket)....then the lights go out! When it turns back to normal, Kirby and his friends notice that every light in the park is out, except one....now the gang must fight through this Galacta Knight's army, called the Shaydees, rescue the civilians and return light to the park! But wait, some friends are missing! Looks like the gang has to rescue them as well....Kirby looks behind him as if to say are you ready? The others nod in agreement and they run to the first,and for now, the only light, wich is Caramel Coaster.

The One Behind It All

After collecting enough Star Keys, you'll ujnlock a special room, once you go in you'll see a Galacta Knight mask and suit, then after the gang looks at it, there's a crazy laugh heard, once the gang come out, they will see Marx's Soul with dark wings, a black cape and green glowing eyes and (in text) he'll say "Wow, you really fell for it! HAHAHA! Well, enough of that, now that i'm back, i will destroy all Pop Star!"

When you start, you'll get a gray Kirby, you have to give him a color, after you do that, the real game starts! You can pet him, give him stuff to eat (wich alters his stats when you use him in Story Mode) and play fun minigames that not only give you Mini-Stars but also gives you all sorts of cool items! The minigames are cool too! (NOTE: The minigames in My Kirby are not the minigames you unlock in stages, these are different)

Hats for your adorable puff to make it even more adorable!

Beam - If you touch on Twinkle with this ability, he makes two small beams rotate around him, this way he can attack enemies!

Hi-Jump - Twinkle just doesn't get it...If you touch and hold Twinkle, then she'll dash super fast like a missile!....To the ground.....

Bomb - If you touch Twinkle, he drops a bomb that players can grab and throw to enemies.

Magic - When you touch Twinkle, he will have 4 cards spinning around him for 5 seconds, if he gets the one with a fire symbol, he shoots fire, if it's ice, he gets ice-breath that can freeze enemies, if it's lightning, he shoots a lightning bolt that shocks enemies and if it's nothing, you get nothing...

Crash - If Kirby gets this ability and presses B there'll be a 50/50 chance that Twinkle gets it, if he doesn't then the Ability disappears...But if he gets it, he can drop bombs that cause powerful explosions!

All of these abilities have a time limit, except Magic wich is one-shot only, and Crash in wich you get 3 bombs only! But of course...with not so many Copy Abilities, Twinkle can do something...certainly special...

Twinkle can mix Copy Abilities easily, when Kirby gives Twinkle a Copy Ability, he can save it for later, if he saves 2 Copy Abilities and clicks the button "Mix" (in the Gamepad) he'll mix them and make a new ability! However, this only works for some abilities!

Beam + Hi-Jump - Twinkle will fire two small orbs with rotating beams that will bounce on the ground (one orb left, the other right)

Bomb + Crash - Twinkle will fire bombs that can cause powerful explosions, just like before, but this time he shoots bombs that can be picked up by the players, and can be thrown to cause bigger explosions!

Magic + Hi-Jump - Twinkle dashes to the ground and crashes, making two bunny bombs (check the Shadow Magician to know what it is) come out of the ground! (One on each side)

Bomb + Hi-Jump - Twinkle dashes to the ground and crashes, making two shockwaves appear on either side.

Crash + Hi-Jump - Twinkle dashes to the ground and crashes, making an explosion!

Beam + Bomb - Twinkle drops bombs that stun enemies if they're caught in the explosion's radius.

He can touch enemies to stun them, he can find invisible stars by clicking on them and he can make temporary platforms for our heroes! But you only get 10 platforms per stage! Twinkle can swing to hit and push enemies off the stage (if they're near a hole) this goes very well with his stun attack! Aside from the Copy Abilities, the only real way for Twinkle to attack is by using the Twinkle Shot, if you touch Twinkle (if you don't have any Copy Ability), he shoots a normal projectile, you can charge it by holding Twinkle for 5 seconds. 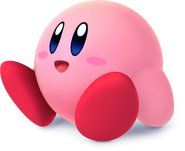 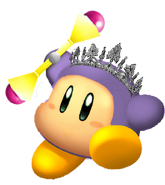