New to the sequel is the new team creation system revamp. While players can create teams from 3 characters on the roster like they could in the previous installment, they can also chose to use either a stand-alone character or a two-person coupling. Additionally, the new Phantogram system incentives the player to play the game in different ways using the new team system. More details on these new systems are available in the Gameplay and Phantogram sections.

The game will also feature a expansive story mode in the vein of the Fighters of Lapis series (which were inspired by the Subspace Emissary mode in Super Smash Bros. Brawl). This story mode will serve as a way to unlock all the unlockable characters without needing to grind. Returning characters will also be revamped with new moves.

The gameplay from the previous game still remains largely the same, with most alterations effecting the team system. When the player goes into character select, they can choose to have up to three characters for a team, two characters for a coupling, and one character for a lone wolf scenario. All picks will result in three usable stocks regardless. The player can also equip or disable Phantograms to boost their characters. They can only have three up at a time, and require clever use of them to fully tap into their potential. When the player goes into a match, they can switch to their other team members if they desire after the first 15 seconds clock by, who each have their own unique health bar. A round will only end when a opponent is KO'd or time runs out.

for high attacks or

for low attacks, as well as a directional input. Characters can also jump using the triggers or the up directional movement on the pad. Players use

to block (down blocks low attacks and up blocks high attacks, neutral blocks neutral attacks) or parry attacks, and

to unleash MAX Mode, which will allow the player to execute special moves depending on what level their Super Bar is. The player can taunt using the directional buttons on the controller.

. The player fills it up over either getting hit or landing hits on a opponent, which will fill up faster if they execute combos.

MAX Mode Moves are as follows:

to use Flowmotion attacks on highlighted objects.

When another player is trapped into a combo, they can cancel the other player's attack with a powerful version of an attack that deals little damage but knocks their opponent far back, which prevents infinite combos and serves as somewhat of a comeback mechanic.

When the player defeats the opposing fighter on the enemy's team, they regain some health in the next round. This is dependent on the time left on the clock; there are 90 seconds per round.

Additionally, there are win conditions that can also influence some bonuses.

Story Mode: FIGHT FOR THE FUTURE

Story Mode: FIGHT FOR THE FUTURE is the story mode for the game. It will be a cinematic story mode in the vein of the Fighters of Lapis series that will center around time travel mechanics to get from level to level and the player will have to play as multiple characters to get through scene to scene.

FIGHT FOR THE FUTURE picks right up from EVOLVE, specifically Pandora's storyline in which she merges many of the outcomes together. The general spanning plot for the three sagas introduced in the game go like this: Aeo itself is under a new mysterious threat hailing from another universe, which even Pandora is helpless to stop; one across time. With the past, present, and future under attack, many of the characters will have to band together to stop the mysterious new threat.

FIGHT FOR THE FUTURE is three "sagas" long and are segmented into episodes. The game segments each episode into fight scenes that lead into the next cutscenes. Players may have a choice of characters to choose from before they battle or they may have to use the characters available to them.

Each of the "sagas" of FIGHT FOR THE FUTURE has a different plot and focus.

A mysterious new force known as the Saiyans arrive on Aeo and pose a serious threat to the wellbeing of everyone on Aeo, taking over kingdom by kingdom effortlessly. This galaxy-spanning saga will see unlikely team-ups and surprise twists, as the developments set up things for the Unchained Time Saga.

Arcade Mode is similar to the last game's EVOLVE except without the unique story routes for each character, instead being a ten round series of fights eventually capped off with a final boss. Each character has a different final boss sent through time to fight.

Remix Mode is a intensely shortened version of the Arcade Mode, still having ten rounds of fights against randomized opponents. However, both livebars are cut in half, the timer is set to 30 minutes, and the player is incentivized to finish fights as fast as possible. They will receive collectibles in this mode, making the grind for them a little faster.

Bosses are special characters that only appear during Story Mode; while they may look and act similar to playable characters, they have special attributes that make them different from how playable characters play. For instance, during their MAX MODE, they normally only have two special moves to execute. They may also have moves in their standard moveset that may possibly do more damage than the usual Level 1 special.

Phantograms are a new tier of collectibles that offer boosts and more rewards for using them. When the player equips Phantograms, they need to have the correct conditions before being able to use them properly. These conditions can be the team or characters, the opponent's team or characters, or the stage people fight on. They basically offer challenges to the player and will boost them if they play under those conditions. They need to be unlocked either through the story mode or during end round loot rewards.

There are five types of Phantograms:

Trophies are a stand in for the Trading Card system for this game. They can be unlocked by random during battles or by spending coins in the Trophy Machine. The base of the trophy shows what kind of trophy it is.

Boxart for the game 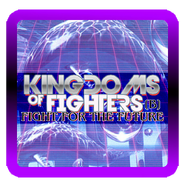 App icon
Add a photo to this gallery

Retrieved from "https://fantendo.fandom.com/wiki/Kingdoms_of_Fighters_B:_Fight_for_the_Future?oldid=3211047"
Community content is available under CC-BY-SA unless otherwise noted.