This is King Plumber. or where you looking for the user Plumber?

King Plumber is the former ruler of Fantendo. He lives in Fantendo Castle, located in the centre of Fan City.

King Plumber is set to apear in Fantendo Chronicles: Episode 1 as the ruler of Fantendo.

He stars in his own titular game. Which shows how he became King of Fantendo.

He appears as an assist. He makes attacks over the course of the fight, quickly disappearing and reappearing. This is noted to be based off Plumber's tendencies to reappear and disappear on Fantendo.

King Plumber appears as an unlockable character in Fantendo Smash Bros. Contrive. In the game, his attacks are mainly quick punches and kicks, though he does have a few "Fan"-based powers. King Plumber is, like Sinless Devil, Litle P, Sandslash P, PalmMan and Henry the Moose, a part of the "Classic" series of characters, represented by an icon of his head. 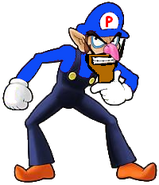