Start a Wiki
King Koopa is how Bowser appeared in the The Super Mario Bros. Super Show! He is a nasty villain which appearance differs in comparison with the video game Bowser, being green and having crown on his head. He will appear again in Super Mario Generations.

In The Super Mario Bros. Super Show!, King Koopa would often take on various aliases and costumes and try to in act a dastardly plot of some sort, most commonly trying to conquer a kingdom or steal an ancient treasure and/or artifact; aiding Koopa in these plots were his Koopa Pack and also a sidekick of sorts, most commonly Mouser. In several episodes, King Koopa would capture Princess Toadstool and attempt to blackmail her into giving him the Mushroom Kingdom, although some other episodes implied he already had some measure of control over the kingdom.

King Koopa will return as a secondary antagonist, Bowser being the main one. Like in the show, he will be once again voiced by Harvey Atkin. 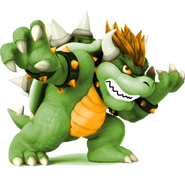 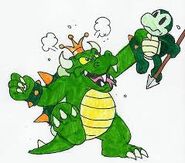 King Koopa and his Troopa

King Koopa with his Scepter

King Koopa, as he appears in King Koopa's Kool Kartoons

King Koopa with a cold 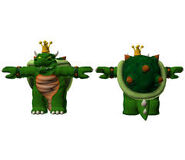 A Model of King Koopa in the Style of New Super Mario Bros. Wii 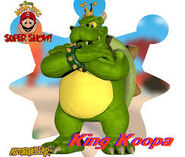 "Do You Princess Toadstool Take This Koopa...?"

King Koopa
Add a photo to this gallery
Retrieved from "https://fantendo.fandom.com/wiki/King_Koopa_(The_Super_Mario_Bros._Super_Show!)?oldid=3213358"
Community content is available under CC-BY-SA unless otherwise noted.