King Dedede is a playable character in Super Smash Bros. Calamity. King Dedede is the self-proclaimed king of Dreamland who is the arch-nemesis of Kirby, though on some occasions he allies with him when there is another greater threat on Planet Popstar.

King Dedede's jab is now just a two hit combo which is weaker.

King Dedede has a new up smash, the Hammer Flip from the Kirby games, which deals more damage (to the point of being the most powerful up smash in the game), however it has more start-up lag.

King Dedede has a new down smash, the Hammer Twirl from the Kirby games, which deals more damage and knockback.

New dash attack, the Hammer Spin from the Kirby games which is stronger.

Release from Inhale is weaker.

Gordos now can be reflected by any attack that deals 10%. 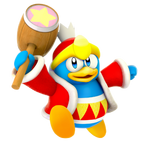 Retrieved from "https://fantendo.fandom.com/wiki/King_Dedede_(Calamity)?oldid=2939242"
Community content is available under CC-BY-SA unless otherwise noted.