“I'll be the one to keep the peace!”
— King Dedede, in Kirby: Star Allies

King Dedede, also written as King De De De, King DeDeDe, King DDD, or simply Dedede, is the main antagonist of the Kirby franchise. He is a large, penguin-like being who is the self-proclaimed king of Dream Land, and the arch-nemesis of Kirby. As such, especially in earlier titles, he often appeared as a boss or even the final or penultimate boss, with his main weapon being a giant, wooden mallet. However, following Kirby's Return to Dream Land, King Dedede and Kirby are on much more friendlier terms, and Dedede has helped Kirby more times than not, with most of his boss battles being a result of him being possessed. As such, it is debatable whether King Dedede is the main (or even an) antagonist of the series or not.

Dedede has since become one of the most popular characters, both in and outside the Kirby series. He is also one of the series most recurring characters, appearing in every mainline title with the exception of Kirby & the Amazing Mirror. This popularity and presence is what led to him being a playable character in the Super Smash Bros. series, first debuting in Super Smash Bros. Brawl and appearing in every game since then.

King Dedede has immense girth, and often tries to crush his enemies under his feet or body. He also has the ability to inhale air and enemies, like Kirby can, which also allows him to fly. He is quite skilled with his mallet, which is sometimes mechanized. It is said that King Dedede got his mallet as a gift from Nightmare.

Dedede has an alter ego known as Masked Dedede. In this form, Dedede dons a metallic mask and wields an electrified hammer than can shoot flames and missiles.

In the Pathverse timeline, Dedede begins the construction of Devotee Castle, to increase the morale of those who visited it and in honor of The Masters. When the castle had been completed, traveling nomads decided to settle around the castle. The number of citizens around the Castle built up, with business developing and homes increasing, the area was eventually known as Devotee City. During the Second Age on the 22nd Anniversary of Devotee Castle, one of Dedede's advisors, Bandanna Dee, is kidnapped by the Blind Man for him to make his future city economically stable. Dedede is paranoid because of this, and thus does a terrible job at being a king, which ultimately leaves most civilians near poverty, leading to raids on Devotee Castle. One of the raids (Lead by Micool the First) had resulted in the deaths of most the remaining Waddle Dee Advisors (Some managed to escape Devotee during the raid) along with King Dedede. Because of this, Micool the First was crowned as new monarch of Devotee City, which he handed down to Micool the Master.

King Dedede will be a playable character in Kirby Wii and movie adaption.

King Dedede makes an appearance in Mario Kart Burst as an unlockable character, appearing alongside Kirby as a guest character. He is a heavyweight driver.

King Dedede will be playable in Kirby Air Ride Wii, and he will be the boss of level 2 in the game's Adventure Mode.

King Dedede appears as a playable character in both Kirby: Onslaught and Kirby: Dark Fury. He serves a more good, yet humorous role.

Dedede appears in Mario & Kirby Baseball as a captain. He uses his hammer to bat, so he has a harder time hitting the ball. However, he has one of the highest batting stats in the game. His running and pitching, however, are bad, meaning he's not very useful if he doesn't hit home runs.

The Throne of Dream Land

In The Throne of Dream Land, King Dedede finds his authority challenged by his own family, Queen Cecece and Prince Bebebe. Unable to bring things to a peaceful conclusion, Dedede is forced to barricade himself and his family in the Grandmaze, a method of criminal execution he has used for 50 years. While trapped, Dedede and his family begin to realize that their greed is worthless, especially after converstaions with Gimmick V. Dedede attempts to activate the Teleport-Exit, but KAOS-com interferes. The Grandmaze software is released, and a "maze effect" covers Dream Land. Dedede watches helplessly as Gimmick V embarks into the Grandmaze to stop KAOS-com. The game ends with Dedede granting Gimmick hsi freedom, and the royal trio bidding the robot farewell.

If the Kirby amiibo is scanned while playing Ice Climber 2 the player can unlock Mt. Dedede as a playable stage, where King Dedede appears as a boss.

Kirby U: The Ultra Jewels

In Kirby U: The Ultra Jewels, King Dedede helps Kirby and Ribbon get past the swarm of meteors near Plasma Star, though later reappears to hinder their progress.

King Dedede is one of the main protagonists in Kirby 65. He is called by Kirby and gladly joins him to save Popstar Galaxy. He serves as a boss, too, under the possession of Minus Zero. In his boss fight, he grows to a giant size and can fall quickly, meaning Kirby has to act quickly.

King Dedede appears in the television series The Stories of New Tendo City. In the series, he is known as Commissioner Dedede, and is the police commissioner of New Tendo City. Despite his high rank, he is depicted as an incompetent, and quite lazy indidvidual. He is mentioned to always be in his office, eating donuts, and watching viral videos, and often leaves the crimes of the city to be dealt with by Police Chief Officer Jenny. He is also shown to have a crush on Palutena, the owner of the city's Japanese Bathhouse.

King Dedede appears as one of the starting characters. 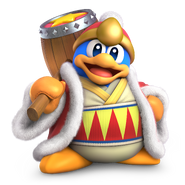 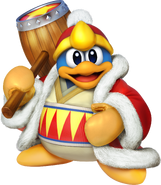 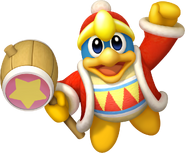 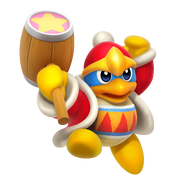 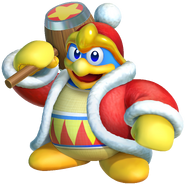 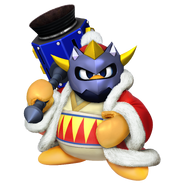 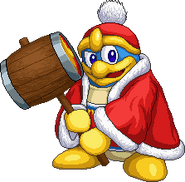 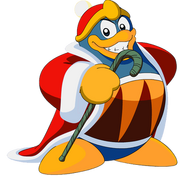 Kirby Right Back At Ya! 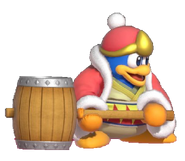 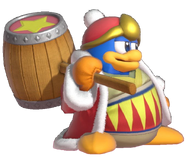 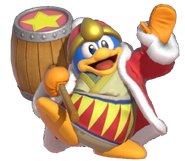 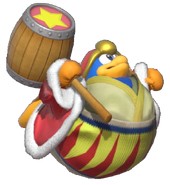 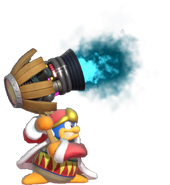 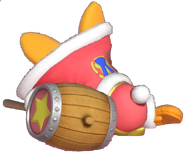