View source
“You arrogent rat! If I sees you sitting on my throne again, I shove one of my trophies right up your mouth!”
— Cube scolding Meta-Form for sitting on his throne before the final battle

King Cube KiloBot, currently as Captain Cube KiloBot, also known as simply KiloBot and formerly known as just King Cube Bot, is the main antagonist of Meta-Form (Series). In the first game, he is the final boss and have two forms. The first form is the humanoid form, while the second form is his true form. His humanoid form have a black antenna.

Cube (formerly name-coded Protector) was created before Meta-Form and used to protect Nadian City, but a former employee hacked him before he is activated and made him evil, wreak havoc on the factory. He is named Cube after that and created his own minions called the Bad Bots.

He also duped the Elite Sevens in order to let no one to get on his way and noticed that Meta-Form is stronger than expected, lied about him and the sevens thought that Metaf is evil and he is a hero. It is backfired after abusing their power but knockout them. He going to do a finishing blow at Cubey but Meta-Form scarifies himself by pushing Cubey and thus, having his core penetrated and blow up into scraps. But Cubey brings his Golden Gear and revives him, and helped him to defeat Cube after that.

He planned to create stronger enemies, and calls his evil friends he have when making his minions, resulting a sequel.

King Cube Bot is extremely strong, being able to lift even something a thousand times heavier than him and, as mentioned above, have an extremely thick armor which weak and near-medium attacks have no effect on him, and that only very strong attacks can flinch him. His super strength allows him to lift his opponent in one hand and, usually by accident, break his own armor.

He is an Electronic Robot and thus able to harmlessly store and deliver electricity, as well as able to use many electronic attacks. His signature Attack, the Giga Devastator (formerly named Mighty Devastator), shoots wild and powerful electronic bolts which is very dangerous for most of his foes. He can also make his voice really loud, able to reach about 150 decibels.

Unlike Meta-Form, King Cube KiloBot doesn't shiftshapes but can uses his own signature mechanical orbs that allows him to modify his shapes, powers and abilities to become more powerful called the Skilletons, making him, combined with abilities as above, one of the toughest villains of the Fantendoverse.

King Cube KiloBot is rude but is highly cooperative except when troops are messing around. When betrayed, he will attack that traitor until that one will excuse or until it is injured or killed (it is accidental most of the times). He tend to avoid problems with the other villains except traitors otherwise he will get in unnecessary fights and may often win does to his unparalleled resistance for a villain and his higher-than-average intelligence and competences.

Although not the most evil, he is quite greedy and loves to cause destruction to his enemies, leaving his troops (whose he really cares for), his friends and obedient slaves as only beings not to attack. He is also a massive glutton; he can eat over 500kg of foods per day, which is obviously way too much for a human being.

Cube hates and disapproves cheating as he knows that it will make villains like him a skill-less sore losers. He minds his own business when his troops are doing this, unless if it could bring Cube to disqualification in a way. He actually have good sportsmanlike, but will not accept if his defeat if his opponent(s) taunts him. However in battles, it is different; if he loses against someone, he may kept going until defeated for real, explaining his tenacity.

He would not join silly or omnicidical villains for personal reasons like one who had no personal hygiene and seems very idiotic, or an irrational and irresponsible god of any kind and beyond trustworthiness, but only serves them if caught and forced to avoid pointless pain, unless if he and his army are prepared for retaliation.

KiloBot tend to ignore loners does to their lack of cooperation, and thus avoid recruiting them as his minions work best as a team. He makes Versapex an exception since she is shown to be kind but naive enough to follow him. His leadership will always boost his minions' confidence but he does know his limit, and often know when to withdraw, or, sometimes reluctantly, team up with his less dangerous nemesis, Meta-Form, to stop a bigger threat or a common nuisance.

He is however clumsy, and his strength tend to lead him in embarrassing situations, or rarely, lead him into a severe disadvantage. When he do tend to be careful about his enormous strength, he might end up to get destructive but nevertheless very dangerous when really furious.

He also started to doubt to stay as a King, does to being aware that there are plenty of villainous kings in the video games, and may often thought for another "leadership" theme to make him to stand out, at least for a while, as a pirate captain. He also become increasingly outraged by the running idiocy the other villains had commit and prefers to use his common sense and his judgement to see if the solution would make his situations better and if it could solve his problems, otherwise he would outright reject the solution.

He had notably low tolerance on anarchy, but is convinced that Tobor is far from anarchic and said that conquering it would still worth it until proven otherwise. He said that if it become anarchic to the point that even conquering the world will not solve any problem, then he will instead build spaceships for him and his entire army to flee from the planet before it could deteriorate beyond repair.

That being said, it is not safe to say that KiloBot is an idiot, but rather genuinely wise and smart; he have a frequent tendency to avoid or escape from bad situations (or even solve them) without resorting into the cowardly ways, and often avoid taking on his foes in direct combat if the moment will not be appropriate, or if the opponents would be too strong even for him to take on, or other circumstances where KiloBot have little to no chance of winning. In fact, he even learns from his defeats and even managed to analyzed Meta-Form's abilities in Meta-Form: Amazing Isles in order to make copies of Meta and make him taste his own medicines. 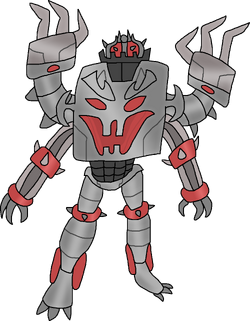 King Cube UltroBot is the fusion between Ultron and King Cube Kilobot that was created when Dr. Doom attempted to summon the two characters to Battleworld during the events of Marvel vs. Fantendo: Battleworlds. King Cube Ultrobot still has the minds of the two characters, wanting to act on his own although he joins with Dr. Doom more out of survival instincts as opposed to anything else. This form was created by Helena Harper (t∣b∣c) and uses the powers and abilities of both Ultron and King Cube KiloBot. It is also listed as one of the four original characters created for the game.

King Cube UltroBot, designwise, takes most of the body from King Cube KiloBot and adds legs to it resembling that of Ultron. The face also resembles Ultron and the crown is slightly altered. The color scheme also takes that after Ultron's iconic face, but the rest is pretty much how King Cube KiloBot usually looks. The wings are also replaced with a second pair of hands, much larger than the "main" ones. Since the two were merged accidentally and by force, there seems to be no way to separate them unless using god-like powers like the Power Cosmic or the powers of the Beyonder.

King Cube UltroBot has all the electrical powers of King Cube KiloBot, although he lacks the ability to fly. He can also use metal orbs to morph his shape and gain mass. King Cube UltroBot also gains the ability to upload his consciousness across a variety of machines, as well as store electrical attacks to charge his attacks. He also has a array of optic blasts to use at his disposal, including a "encephalo-ray" blast that puts opponents briefly into a coma-like state.

Redesign for Meta-Form 2 and onward (sketch) 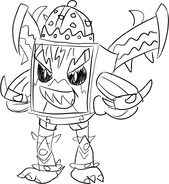