King Bob-omb (also known as Bob-omb King, and formerly as Big Bob-omb) is the ruler of the Bob-ombs. He is part of Bowser's Koopa Troop and is the boss of Bob-omb Battlefield in Super Mario 64 & Super Mario 64 DS. He can be defeated by being thrown by Mario & co. either off of the stage or on a flat surface. His other weakness is fire, causing his fuse to combust and causing him to explode.

King Bob-omb can be unlocked, along with Petey Piranha, as the final character in New Super Mario Bros. VR. He is the worst for jumps and speed, but makes a difference when he can toss Bob-ombs that replace his fireballs (if playing in multiplayer, they don't affect other players). He can be unlocked by beating World 10 and buying him at the Secret Shop for 10 Star Coins.

King Bob-omb is the boss of World 6. He launches Bob-ombs at you and is resistant to fireballs.

King Bob-omb returns once again as a boss in Goomsday Wii. Under the control of Goomboss, the King of Bob-ombs has no choice but to hold back Waluigi. He is the boss of his own Super Castle, Bob-omb Keep. During the fight, he throws active Bob-ombs which can blow up Bowser Jr.'s Paint, which can be used to stick him in one place. The easiest way to beat him is to punch his Mustache, which will send him bouncing off the walls. You must then dodge the falling rubble and wait for a piece of the ceiling to crush him. The next boss is King Boo.

King Bob-omb appears as an unlockable character in Mario Kart: Pro Circuit. He is a heavy character.

King Bob-omb is a playable character of Mario Kart 88. He is the partner of Goomboss. He is a heavy character who is unlocked when you win the Special Cup in 150cc mode. He is also unlockable in Mario Kart: Delta.

King Bob-omb appears as a boss in Super Mario 3D World. He is the boss of Rolling Greens where he appears near the Chain Chomp. He will throw Bob-ombs at the player and the play needs to throw the Bob-ombs at King Bob-omb. Also if the player uses the Statue Leaf they can turn into a statue above the King and defeat him that way.

King Bob-omb appears as a boss in Mario & Luigi: Rivals Quest. He's a boss in Horlek Fortress, he's the one who took the second Shadow Shard before the Wario Bros could take it first. King Bob-omb mostly attack throwing Bob-Ombs, but he can also do a Bomb Pound or an Explosive Dash.

King Bob-omb appears in Super Mario RPG: The Eight Shining Stars as the boss of Chapter 7. He has a max HP of 825. His body slam attack does 18 damage and his Bomb Toss deals 20. His defense power is 6 and he gives 1000 star points upon defeat.

King Bob-omb makes his first playable appearance in Mario Kart Evergood where he is a cruiser type unlockable character.

King Bob-omb appears as a playable racer in Mario Kart & Diddy Kong Racing under the name of Bob-omb Boss. His name has been changed for this game only, similarly to Honey Queen from Mario Kart 7.

The Bob-omb King appears in this Super Mario Bros. MMO 2D platformer produced by Lunatic Entertainment. In the game, his kingdom was overthrown by his former grand vizier, Bomblock, and the king was forced to make his escape from the capital city of Saltpetersburg. He now can be found well hidden in some of the game's areas, and players loyal to the Bomb Kingdom may go on quests for Bomblock, seeking to find the Bob-omb King and "set his fuse" to get rid of him forever. Players who do find him can collect quests from him, where they are to help set up a rebellion to eventually perform a coup on Saltpetersburg and reinstate the kingdom's wayward monarch.

King Bob-omb appears in New Super Mario Bros. The Roman Worlds as the boss for the World I Castle. His attacks are throwing Bomb-Ombs, and walking toward Mario to pick him up and throw him. Mario must defeat him by jumping on him and picking him up and throwing him into a pit.

King Bob-omb is a playable character in Mario Kart for the arcade. He has 19 palette swaps, based on various Bob-omb species and characters. 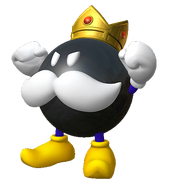 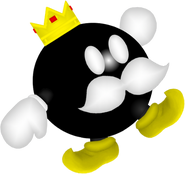 His sprites for SSB: BR.

An animated sprite for SSB: BR. 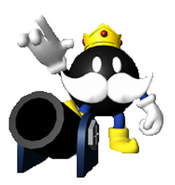 King Bob-omb with his Bob-Omb Cannon. 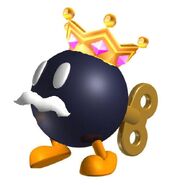 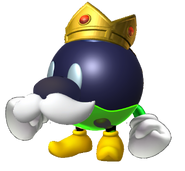 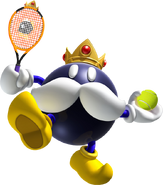 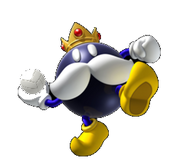 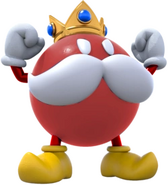 King Bob-omb about to explode 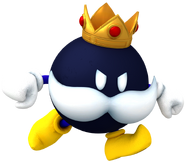 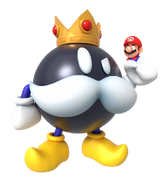