Fantendo - Game Ideas & More
Register
Don't have an account?
Sign In
in: Sysop Approved, Free to use Characters, Characters,
and 8 more

Free to use! Fantendo users can use this character without specific permission.
“What ever happened to the beautifully quiet city that wasn't a battleground?”
— Kid Kiba

Vampyr Kiba Jr., better known as Kid Kiba and born Georgio di Florence Jr., is a heroic vampire who once resided on the planet of Earth, in the city of Kangdara. Kiba has a girlfriend named Samantha. He is very courageous and sometimes quirky, but he will always save the day. Kid Kiba is the titular star of the Kid Kiba series and has appeared in several Fantendo crossover games.

Kid Kiba was born as a Human being known as Georgio di Florence Jr. sometime during the 1500's (hinted to be within the first decade). As he grew up during the Renaissance, he became determined to become a "perfect" man, being great at art, science, literature and geography. When he was 14, his house was lit aflame, destroying his many portraits-in-progress, and killing his parents and younger brother.

Becoming an orphan, he wandered the streets of Florence, Italy as a homeless man, occasionally doing small works of art for some extra money. After a year of living like this, Georgio met a Frenchman named Christian de Pizan, who promised to give Georgio a home, as well as "eternal youth" in exchange for a portrait. Agreeing to this, Georgio painted Christian, and was, indeed, granted what he was promised. He was given a small home to live in, before being knocked out by the strange man.

Upon waking up, Georgio learned that he had been transformed into a vampire by the 14th Century Frenchman, allowing him to stay 16 forever, at the price of being feared by Humanity. Fearing this, he demands Georgio to turn him back, but is denied, and leaves Florence to go into hiding.

Sometime during the 500 years of his disappearance, he stumbles across the small, supernaturally-influenced town of Kangdara, where many creatures live alongside humans. Upon arriving in Kangdara, he changes his name to Vampyr Kiba Jr., and reveals that he despises his vampire life.

He is set to appear as a major character in FANARCHY: WORLD'S END. 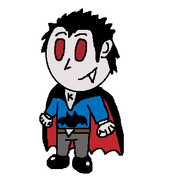 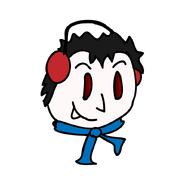 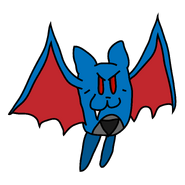