Kid Icarus: Mythis is a game by Toroko and a sequel to Kid Icarus: Uprising. The gameplay is somewhat similar, although the controls have been somewhat remapped for the Wii U. This is the first Kid Icarus game to be released on a home console since the original. This game was announced during a Witching Hour that revealed this game, Wasteland Warriors, and Kingdom Hearts: Denial in Oasis.

The gameplay has been greatly expanded upon the last game (Kid Icarus: Uprising), with multiple playable characters and new tools to use. Additionally, co-op has been added, allowing for up to four players to play at once.

Unlike in the previous game, Kid Icarus: Uprising, you have a total of three (as of currently) playable characters: Pit, Palutena, and Phosphora.

The gameplay is similar to the previous entry in the series: Kid Icarus Uprising. The controls have been somewhat changed due to it being on the Wii U although the core mechanics stay the same. Each of the game's various chapters are split up into air and ground sections. Air sections are on-rail shooting segments, in which players must shoot flying enemies while dodging enemy attacks. Once on the ground, players have more control over their character as they traverse through the level. The player can either shoot enemies from a distance or attack them up close with melee attacks, while also performing various moves to dodge enemy attacks.

As the game progresses, Pit earns several weapons of nine types- bows, claws, blades (a combination of a sword and a gun), clubs, orbitars (two objects that hover at Pit's shoulders), staffs, arms (a weapon that fits around Pit's wrist), palms (magical tattoos covering Pit's arm), and cannons, each with their own advantages and disadvantages. Other characters (Palutena, Phosphora, etc) can only use certain types of weapons.

In addition to these weapons and abilities, Pit is able to utilize armed vehicles in battle and for transportation, which include a mech-like armor known as the Cherubot and a sphere-shaped vehicle known as the Aether Ring. A new vehicle introduced in this game is the Achrabat, a spider-like vehicle that can travel up walls and morph into a batlike glider.

The solo (aka single player) mode is where the main game and its story will take place. Before starting a chapter, you will be able to put hearts into the Fiend's Cauldron to increase the intensity level. The more hearts put into the cauldron, the better the rewards within the chapters. However, the difficulty level will also rise in accordance to the amount of hearts put into the cauldron. Each chapter of the story is divided into three sections:

Continuing from the last game, Pit is granted the Power of Flight from Palutena, giving him the ability to fly for a limited amount of time (specifically 5 minutes at the most) . The areas where this ability is used resemble a free-aiming flight mode as seen in titles such as Panzer Dragoon and Omega Boost, where Pit can fly in one direction and aim in another, reminiscent of the Palace in the Sky in the original Kid Icarus. While flying, Palutena will control Pit's general movement (where he flies), but most of the dodging and attacking is left to Pit to handle. But as the trailer states, Pit can only maintain flight for five minutes at a time, after that Pit's wings will burn out and he will fall.

Although the other characters don't suffer from this (aside from Dark Pit), they are also still limited on the five minute timer.

In a ground mission, Pit (and other characters) have to continuously move forward by solving simple puzzles, overcoming hordes of enemies, etc. These ground sections will make up most of the game. In this segment, Pit's (and other characters') movement is entirely left up to the player.

At the end of every chapter, the characters will face off with a boss character. These range from fighting massive monsters such as Tripletbellows and Orcos, to battling other major characters like Gaia. In some cases, such as with Hewdraw, a portion of the boss fights might take place during the flying sections in addition to the land sections. The stage may also have mini bosses such as Shikusu and Vikteria.

Along with the game's single-player story mode, the game also features multiplayer for up to eight players locally or via Wi-Fi. Players can compete in Team Deathmatches or Free-For-Alls using standard fighter characters. In the Team Deathmatch mode, named Light vs Dark, each team has a health meter that depletes when a player is defeated. The value of the player's weapon determines how far the meter depletes after death, and the player whose death depletes the meter completely will become their team's angel, a more powerful character who represents the team. The match ends when the other team's angel is defeated.

During loading, a minigame will show up. In this minigame, a silhouette will appear and you have the option to guess what Kid Icarus enemy it is by selecting a button. The person with the correct answer will receive a small boost. 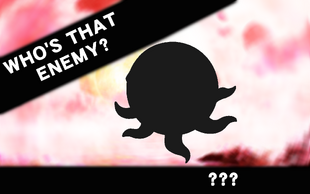 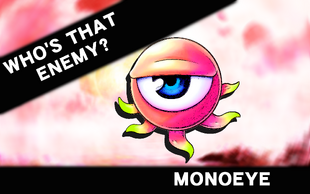 It's Monoeye!
Add a photo to this gallery

Pit, Palutena, Phosphora go up against a new threat: Virdi's mom Gaia, who plans to collide both Earth and her new planet Mythis together in a attempt to destroy the old planet she has since long abandoned.

The story was written by Exotoro, and was meant to recycle as little as possible from Uprising (in terms of characters, locations...), unlike most fan sequels. It is also meant to explore some stuff that were barely touched in the first game, like Poseidon's realm.

Pit learns that Orcos has returned to attack Skyworld and take it over, with Hades' absence being the perfect opportunity for Orcos to try attacking and conquering Skyworld again. He attacks with the Underworld Army while Pit refreshes on flying and land combat. Orcos is the boss here, and every shot you take at him makes him bigger, leading to comments about him compensating for something. However, he doesn't seem to die and just keeps getting bigger and bigger until he straight up steps on Pit. The screen goes black.

Pit wakes up in a ruined temple where Palutena grabs him and holds him back up. Palutena explains that Orcos has taken over Skyworld and sent the two into a "Banished Lands" that he created out of temples that he accidentally stepped on and demolished. Pit flies back and Palutena manages to create a grindrail to the Orcos domain. The boss is Tripletbellows, who guards the Orcos temple and he is Twinbellow's brother. Do not steal.

As Pit and Palutena enter the Orcos temple, Orcos threatens to simply flick them away with his finger. As he does though, thunder sounds and the Lightning Chariot commanded by Phosphora comes in, electrifying him. The constant pain makes him bigger and makes him reset back to a smaller size where he decides to fly away as he shrinks. Pit, Palutena, and Phosphora chase after him in a flight sequence. They manage to corner him and the boss battle is hitting him as many times to get him down to the size of a flea so they can capture him in a jar.

Chapter 4: Back to the Lunar Sanctum

After the Lunar Sanctam was destroyed during the events of Uprising, it underwent a rebuilding by Arlon and Viridi. Reimagined as a prison for all the Underworld forces, it is still under construction. Pit, Palutena, and Phosphora have to get in to put Orcos in. As they quickly discover, the Lunar Sanctam is still very bugged and some of the Underworld forces have gotten free. In the flight segment, Pit, Palutena, and Phosphora head to the Lunar Sanctum and on the ground segment, they traverse the still being constructed prison and drop off Orcos' jar. They learn that one of Hedraw's heads is attacking the control center, so they go to stop him. After stopping him, they notice something coming towards Earth...

Chapter 5: That Is No Reset Bomb

Pit, Palutena, and Phosphora head towards the hurling planet, where they talk with Gaia as the three head into a jungle to figure out what's going on. The flight segment features the three heading towards the planet, while learning info from Gaia about the planet's origins. As they learn, the planet was created by Gaia, who left Earth to form her own planet. Deciding that Earth has become too corrupt (with Pit insisting that they just defeated the Underworld Army) and that it must be replaced with Mythis, a new planet free of humans and corrupting influences. As they head to the ground, the group faces off Gaia's own monsters and one of the commanders of her Mythis Forces, a Manticore.

There are three initial playable characters unlocked in the first three chapters (with a character being introduced in each chapter). These are Pit, Palutena, and Phosphora. Pit is the most balanced of the three, and is able to use all weapon types. Palutena is slower but more powerful and has the ability to set up grind rails. Palutena can only use Staffs, Orbiters, and Bows. Phosphora is the fastest but also the weakest, and is able to teleport. Phosphora can only use Claws, Palms, and Arms.

Two new characters appear half-way through the story, with the first one revealed at the Fantendo 8th Anniversary Showcase. Amazon Pandora can only use swords, cannons, and claws. She has the special ability to play possum, even longer than the original ability in Kid Icarus Uprising.

Shikusu art.
Add a photo to this gallery
Retrieved from "https://fantendo.fandom.com/wiki/Kid_Icarus:_Mythis?oldid=3211043"
Community content is available under CC-BY-SA unless otherwise noted.