Keys are items that appear in many games, including the Mario and Wario series. They must be used to open doors or other locked barriers, or to activate keyholes.

In Super Mario Maze, Keys can be found inside Brick Blocks or behind Thwomps in all levels. They are used to open Keyholes to next levels. When Mario collects a Key, a Key icon appears at the bottom right of the screen.

In Super Mario Evolution, Keys are found in certain levels. They are placed in Keyholes to unlock secret levels.

In New Super Mario World for the Display, keys are used to open locked doors, many of which lead to secret exits. They are also common elements in ghost houses, and may sometimes be required to progress therein. Pressing up in front of a locked door while holding a key will unlock it for the remainder of the time spent in the level.

Keys must be carried, like in Super Mario World, and cannot be taken outside of their respective levels. Carrying one through a Goal Rod will make it disappear and provide a 1UP.

Keys play a huge role in the story of Super Mario: Elemental Journey, as each major boss (called a Baron) carries one. When one of the Barons is defeated, the Baron Key they held is dropped and is picked up and used to unlock their captive and open one of the Elemental Locks on the Elemental Door.

Additionally, a new kind of key called Universal Keys is introduced. Universal Keys look similar to Mario and follow the player around so long as they have a magic wand. They copy the player's moves and are used to power machines or open locked doors.

Universal Keys return in Super Wario Odyssey, resembling the greedy plumber this time around but with the same purpose and function.

Universal Keys return once again in Super Mario Maker Chi as a stage building object. They follow Mario's movements and can be used to unlock locked doors. They no longer require a magic wand to be following the player, instead can be triggered once they appear on screen or through using triggers to activate them.

A key held by a Koopaling in New Super Mario Bros. Wii.

A key held by a Koopaling in New Super Mario Bros. 2. 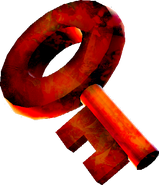 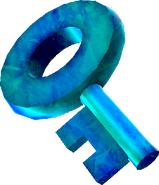 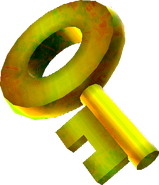 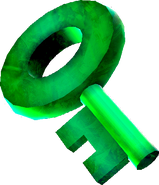 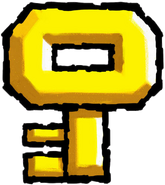 A Key in the Yoshi's Island games. 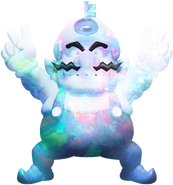 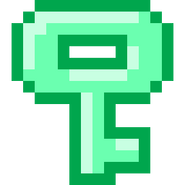 Universal Key from Super Mario Maker Chi
Add a photo to this gallery
Retrieved from "https://fantendo.fandom.com/wiki/Key?oldid=3209301"
Community content is available under CC-BY-SA unless otherwise noted.