Kevin G. Koopa is a member of the Koopalings. He's one of the older ones, and is in between Mulgarth and Angelo in terms of age. He has an extremely strong love for basketball (To the point where he's pretty much obsessed with it), and is stronger than most of his siblings.

It was revealed in an interview that Kevin, along with Dolly, Gwendoline, and Bowser Jr., is one of Bowser's actual children.

Kevin G. Koopa has a bulky Roy-like body. He has the mouth and head that most Koopalings have and contains 2 teeth on the left part and 1 tooth on the right (the smaller one, as the larger one got knocked out while playing basketball as a child). He has a white shell and a small cut on his left leg (also from playing basketball). His hair is a lot like Lemmy's, but instead of being blue, yellow, and pink, it's orange, green, and white.

Kevin is sometimes decipted as a bully by some of his siblings (due to his large build and hanging out with Roy and the other bullies), but he actually has a large, warm, caring heart and is willing to help lots of people. He loves his siblings, and will try to help them whenever he can. Therefore, he's often depicted as the nice one in his group, and possibly the only nice one. However, there's one thing that can sidetrack him anytime and also make him do things you want him to do; playing basketball. He's loved basketball ever since he first played it as a child. He always gets up at 5:30 in the morning, jogs for a bit, and then plays basketball in the basketball court outside Bowser's Castle. Kevin is also very brave, although he doesn't get into crazy things if he doesn't have to.

Kevin is shown to have a magic scepter, like most Koopalings. However, Kevin doesn't use it. It is known that when used, white bursts of flames come out that can harm the player.

Also like other Koopalings, when hurt, Kevin will retreat to his shell and spin around in it (possibly hurting the player), although this is more of an instinct than an ability.

In most battles, Kevin uses his basketballs as weapons. The basketballs will harm the player if made contact with, making them dangerous. He usually breathes fire on them to make them burn the player.

Being his biological dad, He has not only love but also extreme loyalty toward Bowser. Bowser claims Kevin to be one of his favorite Koopalings, alongside Bowser Jr., Roy, and Larry.

Kevin thinks Pietro is so weird that he's actually scared of him. Therefore, he prefers to stay away from him.

Kevin and Persephone haven't really had much of the chance to bond, so their relationship is nuetral. However, she seems to be slightly scared of Kevin.

Dragonia and Kevin have a somewhat positive relationship. Due to Dragonia not liking or understanding sports very much, she doesn't find anything particularly cool about Kevin, but Kevin thinks her magic spells are cool.

Justin looks up to kevin and often wants to play with him. However, Kevin pnly seems to play with Justin on his terms. However, Justin, surprisingly, to most, is actually really good at basketball when paired with a good partner. Therefore, Kevin and Justin like to team up because Kevin's strength and Justin's speed go well together. They clearly have a good relationship.

Kevin and Jacob have actually barely met each other. Kacob has only see Kevin once, when Bowser introduced him to each and every Koopaling.

Bowser Jr., being one of Kevin's actual two siblings, is known more by Kevin than any of the other Koopalinga. However, Kevin, has a negative relationship with Bowser Jr., as he thinks that Bowser Jr. is a spoiled brat and tattletale.

Kevin has a pretty good relationship with Tim. Kevin once helped Tim with a project by making a rock carving of a basketball for him.

Kevin thinks Harley needs to loosen up a bit.

Kevin thinks that Chris looks like a vampire, and therefore prefers to stay away from him. He also stays away from Chris because he thinks that Chris' mouth smells like rotten deviled eggs soaked in 3-year old milk and sprinkled with decade-old shredded cheese.

Larry and Kevin and friends. They play pranks on the other Koopalings together from time to time.

Kevin thinks that Jackson is stupid and needs to face reality.

Gwendoline and Kevin play basketball together in Gwendoline's spare time. It's her form of excercise.

For an unknown reason, Kevin doesn't seem to hate Gwendoline's lips, despite him hating Wendy's and Lady's, which are pretty much the same. Much koopalings say it's because they are dark purple, or just because he has a better relationship with Gwendolyn than the other two (with her being his biological sister). This is also the case with Dolly's lips.

Kevin and Lady have a terrible relationship. They both hate each other and Kevin Koopa said he does not approve of Lady's lips.

Kevin thinks that Morton is annoying. Despite this, he often hangs around Morton.

Due to Roy hanging out with both him and Theo, Kevin hangs around Theo from time to time. They sometimes play basketball together, but Theo often cheats by using firearms.

Risen wants to be Kevin's number one best friend, but Roy holds that title already. Due to this, Risen is a little angry at Roy. Hpwever, Kevin sees Risen as his second best friend, and one of the best people to hang around.

Kevin thinks that Wendy's lips are weird and that she's a spoiled brat.

Noah hangs out with Kevin, albeit rarely. Kevin does want to know about the dimension Noah came from, however, despite Noah not wanting to talk about it.

Roy once dared Kevin to call Elly a goody-two shoes, and he actually did, not knowing Elly would beat him to a pulp for saying that. While they made up, Elly is still kind of made about that.

Kevin kind of hates Ross, but still creates pranks with him from time to time. Kevin prefers to prank people with Larry, however.

Kevin thinks Iggy's inventions are cool, but most of the time he finds Iggy as a psychopathic monster..

Kevin thinks that Jinkesse being a cyborg is cool, but is actually kind of scared of her.

Kevin dislikes Mario K. and calls him a fraud from time to time.

Despite Edwin being the oldest Koopaling younger than him, Edwin doesn't really interact much with Kevin and just isn't his type, while Kevin finds Edwin weird and annoying.

Kevin and Alex are friends, as well as roommates. Alex once electrocuted Kevin's basketball when Kevin and him were both around 6 years old. Alex expected him to be told on and in trouble, but Kevin thought it was cool because it didn't burn the ball, but gave it special powers. Kevin still has the ball to this day, and occasionally uses it in fights.

While Kevin and Lemmy don't interact much, Kevin finds Lemmy cute and him and Lemmy are dibbed the "Mohawk Brothers".

Kevin finds it stupid that Ignis judges people based off what element they revolve around. Kevin dislikes him for that.

Kevin finds Gyro unusual. He doesn't seem to like Gyro either, as Gyro is the nerdy type and Kevin the athletic type.

Kevin thinks Ludwig is too modest, bossy, and ugly. He therefore doesn't like him, and bans Ludwig from playing basketball with him.

Kevin, while notified that Thomas is deranged, finds Thomas cool and likes his Lightbulb Goomba invention.

Kevin and Mortisha have a great relationship. While Mortisha does not play basketball with him, they talk about life together from time to time and Mortisha, knowing Kevin is calm, sympathetic, and understanding, told him her secret.

Kevin and Lavora are friends. Kevin recently got her to like Dubstep music.

Kevin highly dislikes Poopbutt and him, along with most of the other Koopalings, is creating a device that will eliminate him from the universe forever.

Being superior to them, Kevin often makes them do work for him, treating them like slaves (with the exception of Chargin' Chucks). This is actually something quite surprising to see Kevin do.

Kevin hates Mario, but not as much as some of the other Koopalings.

For some reason, 95% of Kevin's hatred goes toward Luigi. It is unknown why.

Kevin, like the other Koopalings, aids Bowser in capturing Peach, but Kevin doesn't exactly care about kidnapping her.

He has an intense crush on her.

Kevin appears in this game as a downloadable character. He is downloaded as part of the Rival Pack, along with Lady. 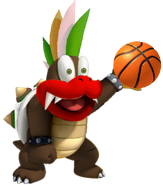 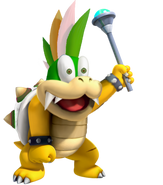 Kevin holding his wand by Topaz 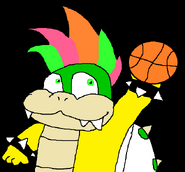 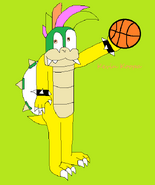 Some more artwork by Emerald
Add a photo to this gallery

Retrieved from "https://fantendo.fandom.com/wiki/Kevin_Koopa?oldid=3337276"
Community content is available under CC-BY-SA unless otherwise noted.