Start a Wiki
Kenny's Kwest 2: The Xedel Return (第二にケニーのクエスト、昔の戻り in Japan) is a 3D adventure platformer by NextGen Solo. It is the sequel to Kenny's Kwest, and features a more detalied and crisp art style, along with much larger worlds, and more of them than the first game, since the Bluevolt has much more space and power to use than the Nintendo DS, on which the first game was released.

Kenny must once again face off against his imaginary race of ancient evil, the Xedel, in an all-new world within a dream, where the Xedel have corrupted previous dreams and thoughts of Kenny's for him to conquer as he tries to find a way to wake up. Along the way, he'll find out the mysterious backstory of the ancient evil, and it's true leader that hides behind the puppet deity Kenny defeated in his first encounter with the Xedel.

Later, in the penultimate world, Dreamception, it is revealed that the true leader of the Xedel is none other than the corrupted form of Kenny's girlfriend, known in this world as Lady Xedel.

Kenny's Kwest 2 combines the pure platforming from the first game with new exploration, action, and even puzzle elements that makes the game go at a faster pace and is also more difficult to complete. Each world holds many collectibles, including one new tool or weapon after a mid-boss (like the Zelda series, but without dungeons), a Xedel Kingdom Key Fragment after the world's boss, and exclusive to the first 5 worlds, Purity Vessels, which you need enough of to open the way to Xedelos' Sky.

Note: In the Xedel Kingdom worlds, you receive a fragment of the Lady's Castle key after defeating a boss.

The worlds of 2K2 are more varied than the first game's. Instead of having worlds with levels that become useless after the first visit, the worlds of 2K2 are filled with collectible items to grab and secrets to find, and after you're "done" with the first 5 worlds and defeat the Intermission boss level, you must return to those first 5 worlds to enter their darker and more difficult areas.

After completing the main game, you can start a new file and choose the difficulty setting of "Hero's Dream" for a whole new experience!

Here are the changes to the main game in Hero's Dream mode: 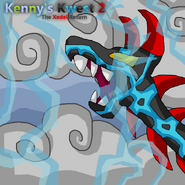 Promotional Art 2 (June 2012)
Add a photo to this gallery

Retrieved from "https://fantendo.fandom.com/wiki/Kenny%27s_Kwest_2:_The_Xedel_Return?oldid=3132624"
Community content is available under CC-BY-SA unless otherwise noted.