This game has been remade!

Kenny's Kwest is a 2D side-scrolling platformer for the Nintendo DS, made by NextGen Solo. It was first announced on (insert date here) and was officially published on May 27, 2011. It is slated for a Summer 2011 release.

Kenny was never the best at paying attention in class. Often his active imagination would take him away to an epic adventure, full of heroic quests and mystery. Then, when he was done living through the quest, he'd draw down a pivotal scene from it to keep a memory of it had he ever want to return.

It was a typical day at school for Kenny, and he'd just gotten home, drawing of his latest daydream in hand. After the evening rolled past, he quickly went to bed, eager to see what dream he would have, if one at all. But, this very night, he dreamed of the same world that he had drawn down earlier! Now, this was an uncommon occurence already, but something awoke him, in the middle of the night. A massive vortex of light, erupting from the drawing and pulling everything in with it, including Kenny!

After he passed out in the vortex, he woke up again, but quickly jumped up, ready to face what fate had thrown him.

He wondered where he was, until he saw the Kajons. They were dinosaur-like, small creatures about 3/4 of Kenny's height, and they were carrying what looked to be a human wrapped in a mummy-type wrapping. They were mumbling a language (Kajospeak) unknown to Kenny, as a line of 5 of them passed by, 3 hoisting the captured body in the air.

Kenny's Kwest's levels are built like a pure platformer, much like the Kirby series, namely Kirby's Nightmare in Dreamland. However, 2K does not incorporate any power-ups except for a rare invincibility item. 2K's worlds have one overworld level that leads into the world map. These overworld levels are 2D and are split into "screens" meaning that it's a long span of sections accessed by running off the screen left or right. 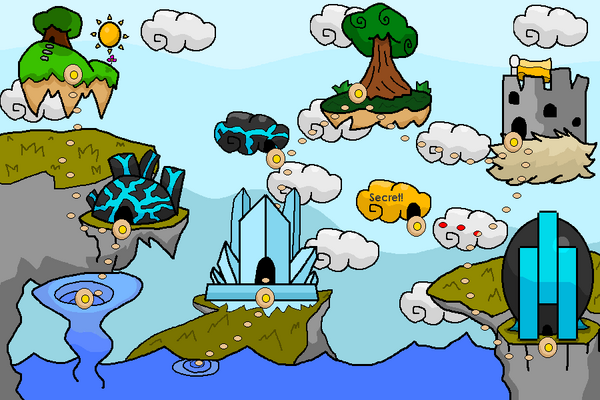 Retrieved from "https://fantendo.fandom.com/wiki/Kenny%27s_Kwest?oldid=1331324"
Community content is available under CC-BY-SA unless otherwise noted.