Ken Masters is one of the main protagonists of Street Fighter, he and Ryu debuted on the first Street Fighter game, the duo has appeared in any game of the franchise until now.

While Ryu is the more serious and stoic of the two, Ken is the complete opposite-stylish, unorthodox and unpredictable, as well as being much more violent and aggressive than Ryu. He is an alpha male with a giant ego and constantly reminds his opponents about his greatness. While he can be brash, egotistical, and arrogant at times, his heart is pure. He is generally kind, friendly, a good person, and very easygoing which led him into starting a family of his own. He never backs down from a fight no matter how difficult it looks.

Like Ryu, he believes in honor, hard work, endurance, and discipline. He always gives his opponents (who are friendly rivals) the utmost respect, whether it is his master Gouken, his best friend Ryu, or his Capcom vs. SNK rival, Terry Bogard. He is also a worrywart when it comes to his family, nearly missing the tournament in Street Fighter IV because he didn't want to leave Eliza so close to her due date, and only entered when she assured him she'd be fine. He still called her to check in and tell her to be careful using stairs.

Ken appears as a Pair Unit teaming up with Ryu.

Ken appears as an Unlockable character.

Ken is a playable character in Super Smash Bros. for the arcade. He is the echo fighter of Ryu. He has 20 palette swaps.

Ken is a playable character in PlayStation All-Stars: Ultimate Battle for the arcade. He is the echo fighter of Ryu. He has 20 palette swaps.

Ken appears as a playable character. 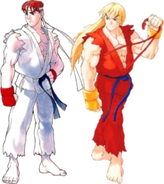 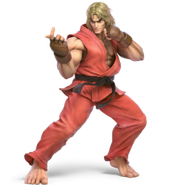