While it is not known to evolve into or from any Pokémon, it has a second form, which is activated by triggering an event in the Pledge Grove, where Cobalion, Virizion, and Terrakion teach it Secret Sword, and it changes its form permanently as long as it knows Secret Sword. Its original form, Ordinary Form, will then become Resolute Form.

Along with Cobalion, Terrakion, and Virizion, Keldeo is a member of the Swords of Justice.

Keldeo is a quadruped, colt-like Pokémon with a cream-colored body. It has a short, rounded snout with large nostrils, and blue eyes. It has a large, feathery red mane, long, dark blue, ridged eyebrow-like protrusions, and a single cream-colored horn that curves slightly. The back of its head, as well as its neck, is covered with fluffy, light blue fur. Keldeo has blue hooves, which are capable of ejecting water. Its tail is light blue with white spots and resembles an elaborate feather in a cap.

Upon learning Secret Sword in Pledge Grove, Keldeo transforms into its Resolute Forme. The dark blue protrusions become shorter and lighter in color, resembling ears. Its horn becomes dark blue, and grows larger and ridged. On the side of its head are three feathers colored aqua blue, green and orange.

Keldeo tends to cross the world, and often appears at beautiful watersides. It can walk across water by ejecting water from its hooves. It is thought that when Keldeo becomes resolute, its body fills with power and it becomes swifter.

Long ago, a fire started in the Moor of Icirrus because of a war among people. In this fire, Keldeo was separated from its parents, but together, Cobalion, Terrakion, and Virizion took care of Keldeo. They acted as its parents, and they taught it knowledge and moves for survival. Keldeo eventually grew and even surpassed the three Pokémon. One day, Keldeo took off from the forest with no one knowing why.

When the four meet again, they teach Keldeo the move Secret Sword.

Keldeo is most likely based on the legend of the kelpie, a supernatural water horse that sometimes appeared as a lost pony. Keldeo is also likely based on the kirin also referred to as the "Chinese unicorn" which are often depicted with a single backwards curving horn and possess the ability to walk on water. Keldeo also draws inspiration from the character of d'Artagnan from the novel The Three Musketeers. Like d'Artagnan, it is the latest and youngest addition to the group. Keldeo's tail also resembles D'Artagnan's trademark feathered cap.

Keldeo may be derived from kelda (Old Norse for spring/fountain) or may be a combination of kelpie, (a water horse from Celtic folklore) and rodeo (a sport involving skills with horses, cows, and other livestock). Furthermore, "deo" is Latin for "god". 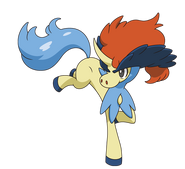 One of Keldeo's Anime artworks 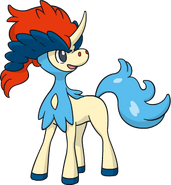 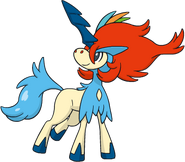 Dream World artwork of Keldeo in it's Resolute form
Add a photo to this gallery
Retrieved from "https://fantendo.fandom.com/wiki/Keldeo?oldid=3201724"
Community content is available under CC-BY-SA unless otherwise noted.