Kat (Japanese: キトゥン Kitun) is the main protagonist of the Gravity Rush series developed by Sony Interactive Entertainment Japan's Team Gravity. Kat is an amnesiac girl woken up by a cat-like creature named Dusty (Japanese: ダスティ Dasuti), who grants her the ability to manipulate gravity. Trying to find out more about herself, Kat's sense of justice has her use her newfound abilities as a Shifter to assist others, taking on the role of a superhero and affectionately becoming known as the Gravity Queen to the populace of Hekseville.

In reality, Kat is the former ruler of the kingdom of Eto, located high above her new home of Hekseville at the top of the World Pillar. She fell from her homeland after the Senate Chancellor of Eto, Xicero, attempted to assassinate her, losing her memories in the process.

Kat is a fairly tall woman with a tan complexion and blonde hair, red eyes, and light lips. Kat wears a black shoulder-less romper, with matching headband and scarf - each with brown accents decorating them. Coiling around her legs, as well as around her jumpsuit, are golden decorations; on her stomach these golden accents form into a sun-like shape. The same golden accents are present on black braces she wears around her wrists and ankles, and also define her black high-heeled shoes. There are small differences in her outfit between her appearances in Gravity Rush and Gravity Rush 2, such as in the placement of her golden accents.

Kat's Guardian, Dusty, takes the form of a small cat. Like all other Guardians, Dusty is solid black and possesses a cosmic texture over his entire body.

Kat is a selfless girl with a strong sense of justice that drives her to always help others no matter the danger. However, Kat is courageous but also incredibly intelligent, who prefers to take a more diplomatic approach to issues rather than relying on combat and her abilities to manipulate gravity. Despite that, Kat's determination to do what is right will sometimes cause her to jump into danger without thinking and cause her to make mistakes she regrets.

Despite not having any memories of her past life as Queen Alua, Kat is incredibly up-beat. As she becomes a hero figure to the town of Hekseville, Kat welcomes and genuinely values the praise and attention she gets from others. Similarly, she values the opinions people have and can at times be sensitive to such opinions should they be about her. There are also times that Kat expresses the desire to find a romantic partner, and seems to express some sense of loneliness.

Though not incredibly present within the games, Gravity Rush: The Animation - Overture shows Kat to be a gourmand. Throughout the animation, Kat spends all her money on snacks and even fights a group of Nevi solely to recover a meat skewer, crying over it when she fails to do so. In Gravity Rush 2, some of the unlockable gestures for the player see her eating various foods such as the aforementioned meat skewer, ice cream cones, apples, and doughnuts.

When she was Queen Alua, Kat possessed many of the same qualities as her later self, remaining kind and always wanting to help people even should others disagree with her. Some of the characters who knew her in this life, such as the Dream Guardian, hint that she had been a poor leader and had been described as weak and vulnerable. Contrary to these statements, since becoming a hero to Hekseville, Kat has demonstrated great leadership skills and will often take charge of others willing to help her do what's right.

Kat appears as a playable character in Jake's Super Smash Bros. As with in her home series, Kat's moveset revolves around her using her abilities as a Shifter to travel around the stage. However she can only do so for limited periods of time, and she must recover her powers by standing on solid ground. 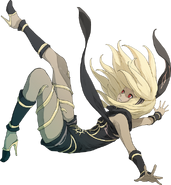 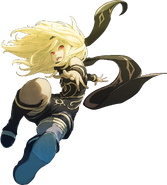