Kamella is a recurring boss in the Mario series, first appearing in Super Mario Galaxy. She is a large Magikoopa in purple and red robes, crystal-colored nail polish, green lipstick, and a giant wand powered by a Power Star. She bears a striking resemblance to Kammy Koopa from the Paper Mario series, another purple, female Magikoopa. Much like Kamek and Kammy Koopa, she seems to have a high rank among the Magikoopas.

Kamella makes her debut in Super Mario Galaxy as a boss. She is first encountered on Space Junk Galaxy during the mission, "Kamella's Airship Attack". She is commanding a fleet of Airships to attack the galaxy, and Mario must make his way through them. Her Airship is purple and red, much like her robes. When he arrives, she appears and battles Mario.

Kamella will generally alternate between two spells she casts with her wand; she can either cast a red spell that creates a fireball that bounces along the ground, or a green spell that creates a Koopa Shell that spins around and bounces off walls. Mario can either jump on the Koopa Shell to stop it and pick it up or use a Star Spin by the shell or the spell before it spawns to pick it up immediately. Regardless, Mario must then throw the shell at Kamella to damage her. After being hit once, she will start moving around the Airship closer to Mario. After being hit twice, she will summon two Magikoopas that will fight alongside her. Each hit will also make her spawn more fireballs when she uses her red spell. After three hits, she is defeated; she disappears and leaves her wand behind, which breaks and releases the Power Star.

Kamella is later rematched in Deep Dark Galaxy during the mission "The Underground Ghost Ship". Mario must reach the eponymous ghost ship, which be battles Kamella on. The battle is mostly the same, though she will teleport instead of move around, which can make her more difficult to hit with shells. After two hits, she floats up to the crow's nest and summons two Magikoopas. She must be hit four times instead of three in this battle, but defeating her grants Mario another Power Star.

Kamella is also battled in Deep Dark Galaxy's Prankster Comet mission "Ghost Ship Daredevil Run". The battle is virtually unchanged, though Mario must not take damage, lest he loses a life instantly. After being defeated again, Mario is rewarded another Power Star.

While Kamella herself doesn't appear in Super Smash Bros. Charged, Kamek does have an alternate costume based on her, replacing his blue and white robes with purple and red robes.

Kamella is the secondary antagonist of Mario & Luigi: Quartet Invasion, being Tatanga's second-in-command and the one responsible for bringing the Super Mario Galaxy and Super Mario Galaxy 2's bosses to the Mushroom Kingdom and Sarasaland, trying to hinder both the Mario Bros and the Wacky Duo's efforts to stop Tatanga. 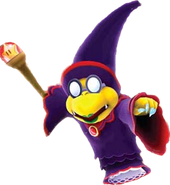 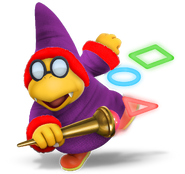