Kage is a Human who lives in Glass Meadows, along with his sister - Myleina.

Kage has pale skin and black coloured hair. His left eye is bright red and his right eye is covered in an eyepatch, with small pink circles under his eyes. He wears a red top, with blue bands on the top and bottom and a red and black hoodie. He also wears blue jeans held up with a brown belt, and some red shoes with black markings. Also, he has pink markings over his hands and face.

Kage carries the Infinity Staff, which is shaped with the infinity symbols at each end, with a blue sphere within it. It can blast psychic type moves. 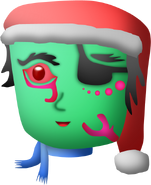 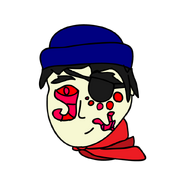 Christmas Mugshot (by Arend (t∣b∣c))
Add a photo to this gallery
Retrieved from "https://fantendo.fandom.com/wiki/Kage_(CT)?oldid=1721838"
Community content is available under CC-BY-SA unless otherwise noted.