Kadabra, (Japanese: ユンゲラー Yungerer) is a Psychic-type Pokemon. It evolves from Abra starting at level 16 and evolves into Alakazam when traded. From Generation IV onward, a Kadabra holding an Everstone will still evolve when traded between games.

Kadabra is a primarily yellow, humanoid Pokémon. It has two large, pointed ears on top of its head, a red star on its forehead, and wide cheeks leading down to a thin snout. Its eyes are deep-set and narrow. Extending from its snout are two mustache-like tufts of fur, with males having longer mustaches than females. Kadabra's torso is segmented with bulky shoulders, a thick, brown chest, and a small abdomen marked by three red, wavy lines. Attached to the Pokémon's abdomen is a large, thick tail encircled with a brown band near its base. Its arms are thin with brown elbows, and end in three-fingered hands with white claws. Its legs have prominent knees and large, three-toed feet, also ending in white claws. Kadabra is always seen carrying a silver spoon, which amplifies its telekinetic powers. It is able to bend its spoon to use Kinesis, its signature move.

Kadabra emits alpha waves strong enough to induce headaches, and can even cause clocks to run backwards, machines to malfunction, and delicate devices to cease functioning altogether. When it has a headache, the alpha waves become unusual. Kadabra can double the amplitude of its alpha waves when holding its spoon, and can increase it even further by closing its eyes. The waves increase further in strength the more danger Kadabra faces. All of Kadabra's brain cells work in unison while it uses its powers. Kadabra lives in urban areas. 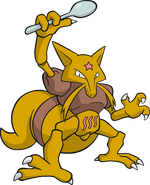 Generation VI
Add a photo to this gallery
Retrieved from "https://fantendo.fandom.com/wiki/Kadabra?oldid=3199910"
Community content is available under CC-BY-SA unless otherwise noted.