KOS-MOS was created by Shion Uzuki and Kevin Winnicot of Vector Industries. During the process, the KOS-MOS Archetype went berserk and killed Kevin. Eventually she was completed, but was activated when the ship they were on, the Woglinde, was attacked by Gnosis. During the escape, one of the lieutenants on the ship, Vergil, was shot by her. After the ship was destroyed, their escape pod was eventually rescued by the Elsa scavenger ship.

They encountered the Gnosis Ship "Cathedral", and during their exploration, KOS-MOS started acting strangely. During their escaped, the party gets rescued by the Durandal, the Elsa's debtor, and their leader Jr.. But on arrival, they were framed for the Woglinde's destruction. To prove their innocence to the Galaxy Federation, they dived into KOS-MOS's memory banks to access the black box that contains the data using the Encephalon. The group responsible for framing them, U-TIC, sends Jr.'s brother Albedo to capture MOMO.

He activates the Song of Nephilim, which summoned countless Gnosis. MOMO was kidnapped during the confusion, and the party heads into the Song and finds Albedo and MOMO. Enraged, Jr. and the others fought against Blue Testament and deactivated the Sound. Before departing, Albedo activates the Proto Merkabah and destroys the federation fleet, then set his sights on Second Miltia. The party heads inside and devise a plan to destroy the station by jettisoning all its compartments, making it explode in the process. They find Albedo in the reactor core, but escapes after turning the reactor into a Gnosis. KOS-MOS managed to protect the Elsa during the re-entry by transforming herself as they escape.

As soon as the party lands on Second Miltia, Shion, Allen and KOS-MOS head for Vecor Industris' Second Branch in order to construct KOS-MOS's Ver. 2 Armor Frame and Tertiary Weapon System. She arrives in time to save Shion from Voyager. While infiltrating Labyrinthos, U-TIC's headquarters, they encounter two of Febronia's sisters Cecily and Cathe who were safeguarding the original Zohar. KOS-MOS tried to stop U-DO by destroying them, but it was in vain: The Patriarch summons Proto Omega, and it fuses with the Zohar and becomes a weapon that can strike anywhere in space. But as they enter the Omega System, they find the Testaments defeating the Patriarch and revive Albedo. Jr. heads into the anamoly he creates and decides to personally stop him. Albedo is defeated and the Zohar is floating in deep space, but before they can retrieve it they witness a stunning sight: Abel's Ark, a Gnosis the size of a planet, takes the Zohar and vanishes.

Vector Industries decides to cancel the KOS-MOS Project in favor of the T-Weapon Program (the project resposible for creating T-elos). After being used in a live-fire exhibition, KOS-MOS was dumped in a trash compactor but she was re-activated by Shion. She continued travelling with them until they encountered T-elos at Rennes-la-Chateau. KOS-MOS was overwhelmed and defeated, and after extensive analysis, she was unable to be repaired. This changes however, when Shion obtains the original designs of KOS-MOS from a past Kevin Winnicot (though still unknown to her) while going undercover as a U-TIC employee. With the help of Erde Kaiser's technology, KOS-MOS was rebuilt into her current Ver. 4 form.

She had gained more power than her previous forms, but it was later revealed that KOS-MOS was actually supposed to be a prototype for T-elos used for the resurrection of Mary Magdalene. On Michtam, the group makes their way to Zarathustra when encouter T-elos again. The battle seemed evenly matched due to KOS-MOS' upgrade, but then she deflect's T-elos' shots with one hand, which she couldn't do in thier last fight. She then shatters the globe on T-elos' head after stunning her with her own Phase Transfer Cannon, shutting her down.

Wilhelm tries to convince KOS-MOS to activate Zarathustra, but instead destroys the key and defeats it along with Shion and the others. As Zarathustra goes out of control, KOS-MOS says her final goodbyes to her true love Shion and stays behind to protect Chaos and Nephilim while they summon the spirits of the Gnosis in order to return to the "Land of Origin" also known as Earth. While she manages to rout most of the incoming Gnosis, a Cathedral-Type Gnosis appears from behind the pair. To protect them she sacrifices herself by using her Phase Transfer Cannon and creates an enormous explosion.

KOS-MOS appears as a Pair Unit teaming up with Fiora from Xenoblade Chronicles once more.

KOS-MOS is a playable newcomer in Super Smash Bros. Galactic Battle, making her debut in the series as a whole. KOS-MOS is a starting fighter alongside both Shulk and Rex & Pyra.

KOS-MOS appears as an Assist Trophy and a Support Spirit. 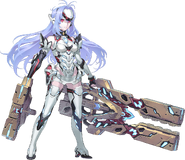