Jynx, known in Japanese as ルージュラ (Rougela), is an Ice/Psychic-type Pokémon and the evolved form of Smoochum at Level 30. It would evolve into Arcueen when traded with a Arculizer. Jynx is an all female species and is also the first Pokémon to have human-like hair and "other" female characteristics.

Jynx is a humanoid Pokémon that resembles a short, bulky lady. Jynx has a red gown which doesn't show its feet, and it has white arms and purple hands. Two golden circles that emphasizes its breasts are placed on its chest. Jynx's face is purple (which was originally black) and has round, pink, fat lips, round eyes with small pupils, and long, flowing blonde hair. Jynx is a female-only species with no true male counterpart.

As Jynx walks, it appears as if its hips wiggle along in a seductive manner. It appears to move at its own rhythm and pace, and uses body language to communicate. Its wriggling and dancing causes people to dance alongside Jynx. Furthermore, it can speak a language that sounds almost the same as the human language. Despite this, Jynx is unable to communicate with humans in this language, since to humans, it sounds like random gibberish rather than actual monologue. There's a research going on to find out what Jynx actually says in its own language.

Jynx communicate with suprisingly human-like cries, though no one can tell what they really mean.

Jynx are human-like in all attributes. In fact, they even communicate with sounds that sound similar to human speech.

Jynx are a rare Pokémon usually found in the mountains, the locals say that Jynx is the reason the mountains stay snowy, even in summer.

Ancient people used to think that Jynx where a sub-species of Humans. Over the years scientists have found that Jynx and Humans share the same evolutionary ancestor. 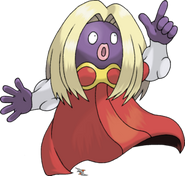 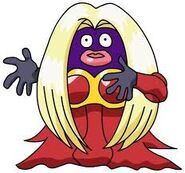 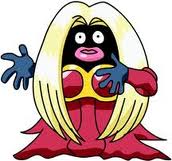 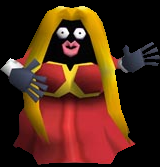 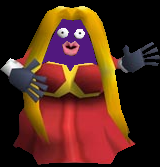 Newer 3D Jynx
Add a photo to this gallery

Generation VI
Add a photo to this gallery
Retrieved from "https://fantendo.fandom.com/wiki/Jynx?oldid=2145396"
Community content is available under CC-BY-SA unless otherwise noted.