Justin Koopa is one of the many fanon Koopalings. He is a small, clever brainiac with a love for magic.

You do not need to ask if you can use him in your games. Just make sure his personality, appearance, and abilities are used for the game, and you do not pass him off as your own character.

Justin Koopa was born on January 17, 2007. At some point in his life at the hospital, he was attacked by an dragon Animal Spirit, which are spirits that can possess anyone in the form of an animal. It targeted Justin for two reasons. First of all, since Justin is already half-animal, the spirit wouldn't have to feel different, considering most of the other patients were humans. Second of all, the spirits had a previous affiliation with the Koopa Troop, but turned against them. They, however, were defeated. However, this dragon spirit was not willingly affiliated with the Koopa Troop at all, and would do good things inside Justin purely for protection. Due to being possessed, Justin obtained the ability to open his eyes much earlier than he should have. He blasted a fireball and iceball at the same time, freezing and burning two walls of the room. His mother, Clawdia Koopa, dropped him in fright, but he grew wings and flew home to Bowser. He was very smart from the Animal Spirit, and therefore got and learned how to use a Magic Scepter at the age of 3 months. He does not remember how Clawdia looked. However, Justin to this day remains amazing, as the Animal Spirit decided to possess him for all eternity.

Justin is quite small. He has an orange head, with hair like Larry's. His eyes are similar to Larry's as well, but are green instead of blue. He has a body almost identical to Tim J. Koopa's and he has an orange shell. He wields the orange Magic Scepter.

Justin is a fun-loving guy. He doesn't like people who are mean, boring, or cruel. He likes to use magic and loves magic-related things. He sometimes takes people for rides in the skies with his dragon wings. He hates people like Roy because bullies are one of his worst fears and least favorite things in the world. He is one of the less-evil Koopalings, and would not want to destroy Mario more than Lemmy.

Justin will make his debut in this game. While it is known that he is a playable unlockable character, his unlocking criteria, stats, and most information are currently unknown. However, it is known that his default minion is a Draglet.

Justin will appear in this game. While it is unknown what world he will be the boss of or what orb he guards, he will be a boss in the game.

Princess Daisy and the Legend of the Sarasaland Scepters

In this game, he is the boss using the Scepter of Health. How his boss fight is is currently unknown.

Justin appears as an unlockable playable character. To unlock him, complete Solo Mode once.

Justin is playable in Mario Kart Double Dash: All Powered Up!, as Kamek's partner. 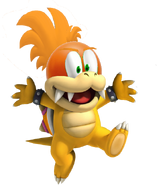