Start a Wiki
Jurassic Park: Combat Evolved is a fighting video game based off the Jurassic Park movies. It will be released on June 14, 2011. It is for Xbox 360, Wii, PS3, and Wii U. It was created by Clover Entertainment.

Jurassic Park: Combat Evolved features 7 modes, like Campaign, Versus, Sandbox and Challenge Mode. There are 18 dinosaurs to unlock and play as. Battle in several large fully destructible enviroments, like Jurassic Park, San Diego, Jungle, Los Angeles, and more. Each dinosaur has unique attacks in its arsenal. The object of the game is to fight opponents until their health is fully depleted. Dinosaurs like Tyrannosaurus, Spinosaurus, Triceratops, Stegosaurus, Carnotaurus, and more are all in the game. Each dinosaur has unique eating habits. Meat-eaters have to eat people to restore some health, while plant-eaters eat plants. Eat the wrong food with either kind of dinosaur, and it'll puke, depleting health. Every time you defeat a dinosaur in campaign mode, you earn Dino DNA, which is points in the game, which you can use to buy and unlock more dinosaurs. Collect bonus material during Campaign mode to see concept art and clips from ALL 3 films. Each dinosaur has its own unique stats too. Tyrannosaurus for example, is the most well-rounded of the giant meat-eating dinosaurs. Spinosaurus is the fastest, and Giganatosaurus is the most powerful.

Fight you way to become the king of the dinosaurs. Play as a dinosaur of your choice, and engage in intense, destructive battles.

Fight off endless amounts of dinosaurs until you die.

Engage in a city environment as a meat-eating dinosaur of your choice, and destroy things, tear apart cars, damage buildings, and eat people.

Take the battle for supermacy to the online world where you can play against your friends or people around the world. Team up, or go it alone.

This is the menu where you can buy more unlockable dinosaurs or bonus content, such as concept art or trailers for the game and all 3 movies. 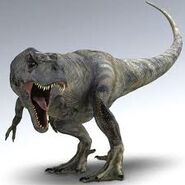 Tyrannosaurus: A dinosaur of the Cretaceous period, it is one of the largest meat-eating dinosaurs around. It grew to 40 feet long and weighed 6 tons. It had sharp teeth to tear through the meat of prey. 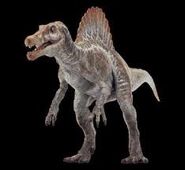 Spinosaurus: A meat-eating dinosaur that had a sail on its back to regulate its body temperature.

Triceratops: The most famous of plant-eaters, Triceratops lived in the Cretaceous Period and had 3 horns on its head which it used to defend itself against predators.

Giganotosaurus: A meat-eating dinosaur larger than even Tyrannosaurus, Giganotosaurus was a monstous behemoth that lived in Argentina and MAY have hunted in packs. 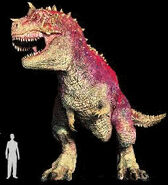 Carnotaurus: A meating dinosaur that had 2 horns on its head. While it was a ferocious meat-eater, its arms were even punier than those of Tyrannosaurus. 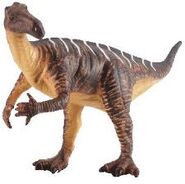 Iguanodon: One of the first dinosaurs to be discovered, Iguanodon was a plant-eater that had a sharp thumb which it used as a weapon to defend itself from predators.

Megalosaurus: The ABSOLUTE first dinosaur to ever be discovered, Megalosaurus was a meat-eater that grew to 30 feet and weighed 1 ton.

Allosaurus: A dinosaur of the Jurassic Period, Allosaurus was the top predator at that time and hunted in packs to take down larger dinosaurs, such as sauropods.
Add a photo to this gallery

Retrieved from "https://fantendo.fandom.com/wiki/Jurassic_Park:_Combat_Evolved?oldid=2878420"
Community content is available under CC-BY-SA unless otherwise noted.