Fantendo - Game Ideas & More
Register
Don't have an account?
Sign In
Advertisement
in: Free to use Characters, Characters, Jake's Characters,
and 8 more

Jumpy Koopa is the nickname given to a hyperactive green Koopa Troopa. He jumps around a lot and imitates Mario's other moves as well as using power-ups and other forms of combat. He is actually one of the plumber's more formidable foes.

Once, as Mario was about to stomp on him, the Koopa panicked and disobeyed Bowser's orders to "[m]ove to the left", instead dodging the hop, removing and throwing his shell, and performing a jump of his own to finish off his red-clad opponent. News of the feat quickly went viral. When Bowser heard of it, he was not angry, but rather, impressed, and increased "Jumpy"'s rank to Koopaling.

Jumpy tends to move around with great speed and agility, and in tense situations doesn't think before he acts. While he has some sense of humor left, his training and position have started to shape him into a ruthless killing machine who bars no holds when taking down his enemies.

Aside from his appearance in Super Mario: Elemental Journey, Jumpy Koopa has always appeared identical to a green Koopa Troopa. Like all Koopa Troopas, he is a small bipedal turtle or tortoise-like creature with a large green shell on his back and similarly green shoes on his feet.

In Super Mario: Elemental Journey, Jumpy Koopa receives a redesign as to distinguish him from other Koopa Troopas. In this game, while still appearing to be a normal Koopa Troopa, Jumpy now has four black scales that protrude outwards from his head. In addition, while still keeping his green shell, he now wears red shoes with a small circle with a "J" centred within.

While Jumping: 2051 also depicts Jumpy Koopa as a normal Koopa Troopa, his colours have been altered in order to allow him to fit more into the darker art style of the game. His skin has become more golden in colour as opposed to a bright yellow, and his shoes and shell a darker green. His plastron his also a white colour with a faint lavender tinge, a colour that is also used for the soles of his shoes.

Jumpy Koopa appears as the main protagonist and sole playable character of Jumpy Koopa's Tower o' Doom!, an endless runner game for the Display, Android, and iOS devices. In that game, Jumpy Koopa is sent by Bowser to capture Princess Peach in order to prove his skills. Unbeknownst to him, Mario and Luigi have built a tower to keep Princess Peach safe from him, forcing him to climb it and avoid the traps the Mario Bros. have placed.

Jumpy Koopa is set to have a role in New Super Mario World as a recurring boss.

Jumpy Koopa appears in Super Mario: Elemental Journey as a boss on Koopa Island Galaxy. Unlike other bosses, Jumpy Koopa is fully capable of using all of the same power-ups that Mario and the other playable characters can, though he is unable to harness the power of the Elemental Stars. Jumpy Koopa only appears in the mission "Fight Jumpy Koopa".

Jumpy Koopa stars in the game Jumping: 2051, a sort of "edgy" third-person shooter title somewhat inspired by the 2005 Nintendo GameCube title Shadow the Hedgehog. Jumpy Koopa is the sole playable character in the game, which sees him travel to the real world in order to scout out a new base for the Koopa Troop after Mario runs them out of the Mushroom Kingdom. Learning about guns, Jumpy goes mad with power, and his former allies attempt to stop him while he believes to be aiding in a civil war ravaging the land they planned to inhabit.

Jumpy idling, a rather rare sight.

Giving a deep stare of disapproval 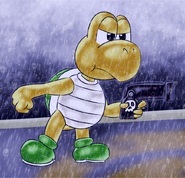 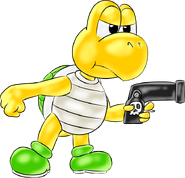 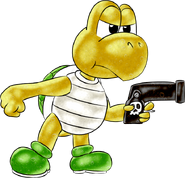 With the sepia mottle and raindrop textures