Start a Wiki
“This is Judd. He’s a cat, if you can’t tell. Long shrouded in mystery, details about Judd are just now beginning to trickle in. Firstly, we can confirm that he’s (probably) not a dog. Also, Judd was born with the incredible ability to judge turf area at a glance to separate the winners from the losers. And it may look like he’s wearing a snazzy cat tuxedo, but that’s actually just the naturally occuring pattern of his fur. Some cats have all the luck.”
— Splatoon Official tumblr


Judd is a cat that appears in the Splatoon series, and the only known creature resembling a (land) mammal. Judd acts as the referee in Turf Wars and Splatfests, and has the special ability to see within a single glance which color has the most ink on a turf, which is nifty to determine the winning team on a Turf War.

Judd is kind of lazy, which is to be expected from felines like him. After judging a Turf War, he can be seen sleeping on a trash bin.

In future titles, Judd is accompanied by a kitten that looks similar to him, named Li'l Judd.

Judd is a plump feline with short legs. His fur is predominantly with black spots and his eyes are yellow. His abdomen has a peculiar fur pattern, resembling a dapper tuxedo with a bow tie. Judd's tail is also shaped like an arrow, which he can conveniently use to point towards the winning team with it.

Judd and Li'l Judd in Splatoon 2 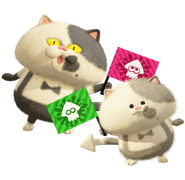 A badge Fantendo users can earn for making 10 edits to Splatoon articles.
Add a photo to this gallery

Retrieved from "https://fantendo.fandom.com/wiki/Judd?oldid=3158969"
Community content is available under CC-BY-SA unless otherwise noted.