Jody Summer is an F-Zero pilot in the F-Zero series. She pilots the White Cat.

Jody Summer was a former officer in the Galactic Space Federation. She had eventually entered the world of F-Zero racing in her late teens after her father, Mason Summer (inventor of the G-diffuser: an essential component to F-Zero machines which grants them their anti-gravity ability), had passed on after succumbing to a fatal accident. In her father's name, Jody swore she would do him proud and win the Grand Prix, building the White Cat machine with the help of her Federation allies (named after the common nickname her father would associate with her)! She had later found victory to be quite difficult as she was still a rookie pilot and less than a shadow when stacked up to the likes of Captain Falcon. Regardless, she is often commended for her ability to control any F-Zero machine at the peak speeds they reach, an amazing trait for such a newcomer at the time. Jody Summer also happens to be the apple of John Tanaka's eye, who pursues her in every race intended to protect her from harm and win her affection. Nevertheless, this spunky underdog is fiercely determined to show exactly what she's made of to any veteran racer who may cross her path!

Jody Summer appears as a playable fighter in Super Smash Bros. Universe. However she must be unlocked before she can become playable. Like her fellow F-Zero pilots, Jody can call out for the White Cat for her Final Smash. In addition, the White Cat can be spotted racing on the Mute City stage, even if Jody is fighting.

Jody Summer returns as a playable character once again in F-Zero U. Due to the fact that F-Zero U takes place 10 years after F-Zero GX, Jody is now 35 years old. She's still not married, and John Tanaka still tries to pursue her. 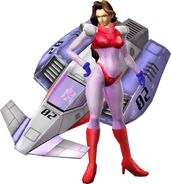