Jirachi is a small, white, humanoid Pokémon. It has short, stubby legs and comparatively longer arms. There are flaps on the underside of its arms, which give the impression of long sleeves. On its belly is a curved seam, which conceals a third eye, known as its "true" eye. Additionally, it has a normal pair of circular eyes on its face, with small, blue triangular markings underneath. On its head is a large, yellow structure with three points extending outward: one from the top and one on either side. On each point is a blue tag, known as a "wish tag". A rounded extension hangs from either side of the yellow structure, framing Jirachi's face. Two yellow streamers flow from this Pokémon’s back, resembling comet tails.

Jirachi hibernates for extensive periods, forming a protective crystalline shell as it sleeps. However, it is still capable of fighting while asleep if it is in danger. It awakens for seven days every thousand year, but can also waken if sung to by a voice of purity. During the short periods when it is awake, Jirachi is said to grant wishes. However, in the anime, Jirachi cannot create an object that is desired from a wish. Instead, it teleports the desired object to the person that made the wish. In the Pokémon Adventures manga, Jirachi's wishes are granted by writing on the three tags located on its head. Due to only having three tags, Jirachi can only grant three wishes. The anime further reveals that Jirachi's awakening is linked to the Millennium Comet, and that its third eye has the ability to absorb the energy Jirachi needs for hibernation. Although it is extremely rare, Jirachi can be found in the mountains. 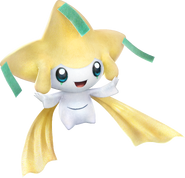 Jirachi's design and ability of granting wishes probably refer to the habit of "wishing upon a star", so that the wish will come true. Considering its humanoid appearance and ability to grant wishes, it is also possible that it was inspired by Arabic myths about genies, or djinn. In some myths, imprisoned genies would grant wishes to the person who released them. The tags of paper on its head are a reference toward the paper strips (短冊, tanzaku) written on Tanabata.

Jirachi is derived from желать zhelatʹ (Russian for wish). It may also involve 幸 sachi (wish, happiness, or fortune).