View source
Spoiler warning: Plot or ending details follow.
“I am the white void. I am the cold steel. I am the Just Sword. With blade in hand shall I reap the sins of this world, and cleanse it in the fires of destruction. I am Hakumen, the end has come!”
— Hakumen's pet phrase.

Jin Kisaragi (ジン＝キサラギ) is a character from BlazBlue franchise, first appearing in BlazBlue: Calamity Trigger as the second main protagonist. He is the brother of Ragna the Bloodedge and Saya.

Hakumen (ハクメン) is the leader of the Six Heroes and the main wielder of the Susanoo Unit. Though he hides his identity from others, Hakumen is an older Jin Kisaragi from an earlier timeline. As such, the two of them possess many of the same personality traits and features.

Where his brother Ragna is hot-tempered and quick to draw first blood, Jin is cold, aloof, and borderline sociopathic. He cares little for the feelings of others, and denounces, in his own words, trivialities like camaraderie, believing that such things are lies that people use to their advantage. He has no compunction with killing anyone who gets in the way of his goal. In addition, he repeatedly shows that he dislikes reminiscing about the past, particularly about his days at the Military Academy.

This, however, is all a façade. The moment he reunites with Ragna, Jin loses his calm, detached demeanor and reverts to his childhood self. His voice becomes noticeably more ecstatic, and he is now prone to fits of maniacal laughter, mostly due to Yukianesa’s influence (which compels him to kill his brother due to his nature as the Black Beast, as well as the Power of Order, which perceives him as a threat to the stability of the world). In the past, Jin would often cling to Ragna for assistance with everything, which greatly annoyed him and was jealous of Saya when Ragna spent more time with her. However, it is shown during the first time loop that Jin loved his sister Saya as much as he did Ragna.

It is also shown that he was friends with his classmates, Carl Clover, Tsubaki Yayoi, and Makoto Nanaya during their time at the Academy (though he showed a noted uneasiness towards Noel due to the disturbingly strong resemblance to his sister and treated her rather coldly which only got worse in the aftermath of the Second Great Magic War). In particular, he holds a genuine soft spot for Tsubaki, who was his only childhood friend after he was whisked away from his old life and adopted by the Kisaragi house of the Twelve Originators. The two share a long history together that is linked across the timelines.

In BlazBlue: Chronophantasma, Jin is noticeably more focused on saving Tsubaki and although he is still antagonistic towards Ragna, he is willing to put his murderous desire aside and cooperate if it means saving Tsubaki. However, he is still cold towards Noel and remains anti-social.

In BlazBlue: Centralfiction, It is shown that Jin no longer acts obsessively towards Ragna, referring to him as “The Black One” not unlike Hakumen. Jin seems to have become more like Hakumen, taking on an overall calm yet stern tone of voice. In the near end of the game, Jin is confident when he wears the Susanoo unit using Trinity’s magic to become Hakumen until she diffuses with her magic to not let him unable to stop Ragna from fighting his sister. But deep down however, he does seem to care for his siblings as a sign of his maturity.

Hakumen is a very serious individual who is usually extremely focused on the task at hand and rarely shows any emotion beyond stoicism. His attitude can come off to others as prideful, stubborn, and even arrogant, occasionally getting him into issues with his comrades when he refuses to cooperate with them and tries to handle things on his own. His solitary goal is to eradicate evil wherever it hides and rarely compromises, warning his target to not take his mercy lightly when he spares them. During his Bad Ending in BlazBlue: Continuum Shift, Hakumen completely loses his temper when Hazama brutally tortures Tsubaki in front of him. Having already witnessed Tsubaki’s gruesome end in his own timeline and harboring immense guilt over the fact that he didn’t stop it, Hakumen can’t bear the thought of having to witness it again.

While Hakumen is generally cold toward others, he does have respect for Jūbei, Valkenhayn, and Trinity, occasionally indulging them in conversation. Although Rachel Alucard frustrates him with her commandeering attitude, he is willing to tolerate her to some extent not unlike that of Ragna. He also shows respect towards Bang Shishigami as a fellow man of justice and shows kindness towards Celica Ayatsuki Mercury, occasionally doing favors for her.

Due to the fact that Hakumen is Jin Kisaragi’s alternate future self, they share many similar traits. Both are cold, stubborn, anti-social, and have a desire for Ragna to die by their hands. However, while Jin’s desire is brought out as an obsessive impulse, Hakumen merely does so as it is his destiny, yet regrets every bit of it, showing that deep down he cares about his brother.

Due to his ego, Hakumen often clashed with other members of the cast. Over time, however, he has become much more focused on the more important matters, letting fate run its course with the rest of the cast and not interfering with their affairs. Even though he considers Ragna his greatest opponent, since BlazBlue: Continuum Shift he has put aside their rivalry for the sake of the greater good. By BlazBlue: Chronophantasma, their rivalry is noticeably less hostile and he is more cooperative with his comrades.

Both Jin and Hakumen are part of the BlazBlue DLC Wave 1.

Jin is one of the newcommers of the game, his rival is Ky Kise from Guilty Gear series.

Jin appears as an assist character in Jake's Super Smash Bros., who must be unlocked before he will appear. Jin attacks foes with his sword and crystals from Yukianesa, with most of his attacks freezing foes in blocks of ice. 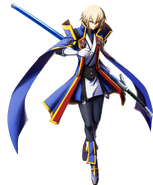