Jimmy Thang, although more commonly known as Jimmy T., is a major human character in the WarioWare series. He is a disco-dancing nut with a big blue afro and a mustache that resembles musical notes. He enjoys dancing at nightclubs, particularly Club Sugar. Jimmy currently resides in Diamond City. He first appeared in WarioWare, Inc.: Minigame Mania as one of Wario's friends who helped him produce microgames. 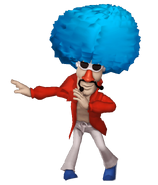 By JoeAdok on DeviantArt
Community content is available under CC-BY-SA unless otherwise noted.
Advertisement