Jet the Hawk is a character in the Sonic the Hedgehog (series) and the leader of the Babylon Rogues. He debuted in the Nintendo GameCube title, Sonic Riders. SEGA later made a sequel called Sonic Riders: Zero Gravity and Jet was playable in that as well. He is also in Sonic Free Riders, and still a playable character. His latest appearance is in Mario and Sonic at the Olympic Winter Games. Though he is not playable, he is a rival, you go up against in Snowboard Cross. Jet is very cocky, bossy, and mean, and he's in races to win, not to have fun.

Jet is one of the eight downloadable characters for Super Smash Bros. Channel. After downloading him, the player will also recieve the Metal City/Night Chase stage.

He can be seen snowboarding along with Bowser, Wario and Donkey Kong in Penguin Kingdom.

Jet makes a cameo again in in the game, riding his gear in Panda Forest.

Jet makes an appearance in Sonic Heroes 2 at the helm of Team Babylon. 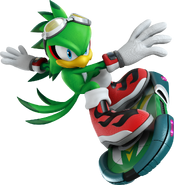 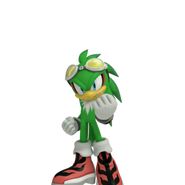 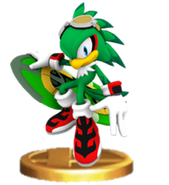 Add a photo to this gallery
Retrieved from "https://fantendo.fandom.com/wiki/Jet_the_Hawk?oldid=3324895"
Community content is available under CC-BY-SA unless otherwise noted.