Jet Wario is a form of Wario that debuted in Super Mario Land 3: Wario Land. It allows Wario to glide across the air for a few seconds before descending. The player can cancel out his glide and then do it again for a near infinite glide that doesn't loose much vertical momentum. Wario still had his normal strength in this form however, requiring blocks to be hit twice to destroy them using his Barge ability.

When Ashley uses it, she becomes Jet Ashley and her spells become cloud platforms she can use.

Eagle Wario is an alternate form of Jet Wario that debuts in Virtual Boy Wario Land. The power-up requires the Eagle Statue. It functions pretty much identically to Jet Wario with the added bonus of being faster and overall lighter, allowing Wario to execute bigger jumps. In Super Wario & Kirby Maker, the Eagle Statue power-up flies farther and faster than the Jet Pot, but descends faster.

One of the several power-ups in the game, usable by Wario, Waluigi, and Ashley. When Kirby inhales this, he gets the Parasol ability. 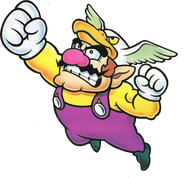 Eagle Wario
Add a photo to this gallery
Retrieved from "https://fantendo.fandom.com/wiki/Jet_Wario?oldid=2407113"
Community content is available under CC-BY-SA unless otherwise noted.