Start a Wiki
“It was your time, I have always seen your heroic soul... You have always been the Green Bracelet.”
— Jessica to Aingeru after fighting in Battle of Bracelets 4: New Generation.
Jessica is one of the characters that appears in Battle of Bracelets series. She is one of the characters that first appears on Battle of Bracelets 4: New Generation. She has been one of the Golden Bracelets of the first generation, exactly the Green Bracelet, the owner of the same before Aingeru got it. Her nemesis is Erik, the first Dark Green Bracelet. Her main weapon is the Green Sword, a kind of medium sword that is really light and can get burned, electrified, frozen or magnetized, depending on what she wants. Her main abilities are the Gas Form, she becomes a gas body that is invulnerable to any attack except

attacks; and Wind Absorption, that lets her absorb the energy from air once per fight. 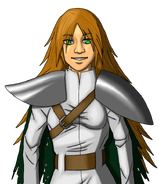 Jessica as a warrior in Aingeru's dreams.
Add a photo to this gallery
Retrieved from "https://fantendo.fandom.com/wiki/Jessica_(BoB)?oldid=3131113"
Community content is available under CC-BY-SA unless otherwise noted.