“FUCK THIS LITTLE FUCKING SHITTY PLANET, FUCK THIS FUCKING SHITTY FUCKING UNIVERSE, FUCKING FUCK FUCKING EVERYTHING!!!”
— Jess, Jess' Quest
This character is free to use in fanworks. Unless permission is given by the owner, all other usage of the character will be considered non-canon.

Jess is a human/vampire from Earth. She is rather well known for having serious anger and rage issues. She is also well-known for her excessive amounts of strong language and alcoholism.

Jess may not exactly strike fear at first. She is a short 21-year-old white woman who has long brown hair. She wears a purple jacket with a lime green shirt underneath, black jeans and black leather combat boots. She has brown eyes and two bizarre emblems on the back of her hands. One is in the shape of a flame, and the other in the shape of a snowflake.

Whenever she uses one of her powers, her eye colour will change and the emblem will glow. Her eyes will go red if she's using fire and they will go cyan when using ice. She has a normal glove on her right hand and a fingerless glove on her left hand. She also has fangs.

As of A Day in the Life of Schmidt And Jackson, Jess has a large tattoo of a flaming skull and crossbones on her back and two very detailed sleeve tattoos. Jess also, on occasion, wears a black jacket covered in spikes. The spikes go all over the jacket, and it is near-impossible to actually see the jacket itself.

Jess has had lots of problems growing up. During elementary, she was a great student who got awards and high grades. However, Her life went south exiting elementary and going into middle school. She has had anger problems since she was in 8th grade and has had multiple meetings to calm herself down. This instead increased her anger and got to the point where she got expelled thrice in high school for incidents including each high school's principal.

Jess says that her anger stemmed from her first high school clamping down on her. They treated her like dirt on their shoe and never saw Jess in a positive light. Se never found out why they were like this with her but it pushed Jess over the edge. This resulted in her losing it at teachers and was constantly being given detentions by teachers over the slightest things. Jess had enough and started lashing out, attacking teachers constantly, and this resulted in her eventually getting expelled.

When Jess was 18, she was sent to prison for two years for multiple assault charges, two of which included the high school principals. She failed to contain her anger while in prison and ended up attacking multiple guards. The guards attempted to contain her in a straitjacket but she burned through it and set the prison ablaze.

Her home life doesn't help sooth her anger, with her parents "being dumber than a bag of rocks", so she tends to vent their idiocy by using her powers. While she has never full on assaulted anyone, she is extremely fast at getting angry and going at someone. She is also apparently queen of some faraway kingdom that she's never given a name. After turning 21, Jess seemed to get a taste for wine, and ended up becoming a bit addicted to it. Whether she drinks to forget her school days or not is unknown, but it normally ends with her emotions swimming in fluids.

As stated before, Jess can be angered extremely quickly. No one is safe when she is angry, as she can set an entire forest on fire when enraged, or freeze an entire city. She can also tend to overreact to a few things, such as someone declaring their love to her or finding her attractive, as shown in First Comes Love, Then Comes Marriage when Nikolai admits he likes her and Back To The Fantendoverse, where Zabrent says she is attractive.

It's usually easy to tell when Jess is angry, as her eyes go a dark brown, her heartbeat gets loud and heavy, pumping blood nonstop, and she starts to lash out, acting like Hulk. Her rage has made even the most evil of people scared of her. She is commonly referred to as a psycho, both by people outside of her circle of friends and in her circle of friends.

Despite Jess' extremely bad anger issues, she can be calmed down extremely easy. Normally, chamomile tea does the job but if Jess is especially angry, seeing or talking to Nikolai can easy kill her anger, and she falls into Nikolai's arms very quickly.

If Jess gets extremely angry, she can start to become extremely hostile, and tends to only growl at this point of anger. She will tend to do things recklessly in her rage without thinking through what could happen, and who will end up being a victim of her actions. She has been seen as bipolar by some. Jess also has a bad tendency to swear a lot, which apparently stems from her harsh life.

Despite her rage and vulgar language, Jess has "standards", and tends to avoid derogatory terms and attempts to avoid taking her rage out on her friends. Jess also tends to go a bit over the top with things she loves, such as pain.

Jess has very strong pyrokinetic abilities that she uses more often than not, and they can go way out of her control when she gets extremely angry. She tends to use it whenever she is getting intensely angry. She also possesses cryokinetic and telekinetic powers, but she does not use these very often. Despite not looking like it physically, Jess is also extremely strong, especially when she is in an angered state, and is able to lift vehicles without a problem.

Jess is also able to exhale fire if she gets to a certain point of anger. When fighting, Jess is usually angry and will tend to go overkill with her tactics, more often than not clobbering her enemy with either her fists or a bat, and sometimes manages to kill her victims by seriously overpowering them. She has been shown to be able to decapitate people with a single uppercut, as seen in Back To The Fantendoverse.

Things between Nina and Jess didn't start well, with Nina being cocky towards Jess, but after Odd Friendship the two started to get along and are now best friends.

Jess and Brendan are good friends. Brendan used to be Jess' only source of calmness, but over time she developed more ways of staying calm.

Jess and Leah have a bit of an awry friendship. Leah finds Jess intimidating after Jess attempted to knock her out in A Spy's Duty.

Nikolai and Jess have a fairly strong friendship going. Their friendship started in First Comes Love, Then Comes Marriage when the two end up having a fling following Jess beating Nikolai up. In Back To The Fantendoverse, it is implied that the two may soon be in a relationship.

Jess and Blaze's relationship is shrouded in mystery. The two get along at times and at others they have extremely tense air between them.

Jess finds Amy to be one of the nicer people she's met and respects her greatly. Amy tends to try and help Jess calm down when she is angry, but with little success.

Krystal and Jess get along well. Jess thinks Krystal is cool, what with her tattoos and her gun, and is trying to pick up on Krystal's fighting style so she can use it. 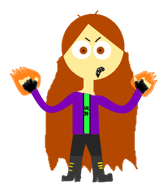 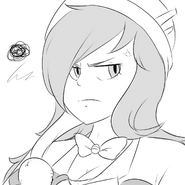 Jess in a Christmas style, as drawn by Ziegs (t∣b∣c) 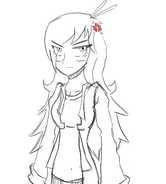 Retrieved from "https://fantendo.fandom.com/wiki/Jess_Pierce?oldid=2600162"
Community content is available under CC-BY-SA unless otherwise noted.