Start a Wiki
“Sorry I sound so down, but you would be too if you saw Luigi dressed as a bride.”
— Jerry, Paper Mario: The Thousand-Year Door


Jerry is a Bob-omb who teams up with Luigi in order to find the Marvelous Compass in Paper Mario: The Thousand-Year Door. Before joining Luigi's party, he lived in Plumpbelly Village. He resembles a cherry, due to the red color and his fused shaped like a cherry stem, referencing the type of firework called a cherry bomb.

On Luigi's quest to find the Marvelous Compass pieces, he ends up in Plumpbelly Village, where he meets Jerry and teams up with him. Luigi dresses up as a bride so he can be offered as a sacrifice to a two-headed snake, getting a piece of the Marvelous Compass. However, they eventually defeat the beast. Afterwards, Jerry accompanies Luigi on his adventure, though says it's only to make sure that no one has to witness the horror of seeing Luigi dressed as a bride ever again.

Jerry appears in this upcoming game as Luigi's second partner. Though both his and Luigi's motives are unclear at the moment, Jerry is known to have an impressive array of attacks and is still scarred by the memories of Luigi in a bride's dress.

Jerry appears in the upcoming game as a playable character, though not much is known about the game yet. 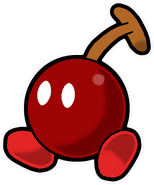 Luigi and his partners by Pokerninja2 (t∣b∣c)
Add a photo to this gallery
Retrieved from "https://fantendo.fandom.com/wiki/Jerry?oldid=3057095"
Community content is available under CC-BY-SA unless otherwise noted.