Jangmo-o has been and always will be a small, quadruped Pokémon almost like a dinosaur. The lower half its body is black, while the upper half is light gray. It features a beak-like snout with a little, tooth-like spike in each corner of its mandible and large, red eyes. On the front of its head may be a large, heart-shaped yellow scale. A little tuft almost like ears or small feathers extends from the rear of its head on either side, and there's another small, white tuft on its chest. Six teardrop-shaped, loose-hanging scales form a half ring around its shoulders. These scales are gray with stripes along the surface edge. A solid yellow scale of an equivalent shape is on the tip of its tail. Each of its feet has three yellow claws.

While Jangmo-o trains diligently and remains humble, it's the pride of a warrior. It employs the size on its forehead for both attack and defense, so it never shows its back to its foe. Many Trainers take this behavior has proof of this Pokémon’s valiant nature. Jangmo-o lives and trains with others of its kind in harsh areas that are faraway from other Pokémon and other people.

Jangmo-o appears to be based on an ankylosaur.

Jangmo-o may derive from jangling and moʻo (Hawaiian for lizard or dragon). 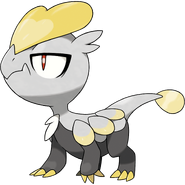 Official art
Add a photo to this gallery
Retrieved from "https://fantendo.fandom.com/wiki/Jangmo-o?oldid=3213265"
Community content is available under CC-BY-SA unless otherwise noted.