Jane is a major recurring character in the Dark Woods series. She makes her first appearance as a secret boss in Dark Woods and is a major ally in the following games, excluding Dark Woods V: Freak Show.

In the first game Jane appears as an optional boss that can be fought after completing the Swamp area. Mr. Seemore there tells about a strange disturbance in the swamp, and Hein goes to find it out, constantly following a female voice echoeing through the swamp. He eventually enters a temple-like area where Jane appears. Hein fights and defeats her to which she afterwards says: 'Come visit us' and disappears.

She appears again in the Swamp level in the second game, where she becomes an ally of Hein and the others. She guides them to her village, full of swamp people, and tells them of a large man that is burning their swamp and requests Hein's help. They eventually discover that is was the Scorching Smile possessed by the Capricorn, and defeated the demon. Hein informs Jane and her village about and assures their safety.

During the events of the third game, Lily and Ligeia end up in the Swamp and after venturing through it they arrive in the village where Jane approaches them. She tells that Ashley has summoned some kind of swamp monster that is devouring all of the swamp people. Lily and Ligeia fight and defeat the monster, freeing some alive nymphs, despite that many are dead, and return to the village. Jane tells them that they can always come and visit as she has some interesting things to sell to them.

Like many other of the swamp nymphs, Jane has fled to the circus tent for safety after the Dark Woods had become too dangerous to live in. When Pan is seemingly revived the heroes want to look for a way to return his sanity. Jane suggests going to the swamp to retrieve the Whispering Flower. Hein and Ashley venture into the swamp with Jane to get the flower, but are interrupted by a revived swamp monster. While Hein and Ashley fight it, Jane grabs the flower. When they return to the circus tent, Jane gives the flower to the swamp shaman to make a potion out of it while Hein and Ashley lure Pan to the intersection. There they meet up with Jane again who hands them the potion and departs again. Jane is one of the many people to flee the circus tent later when Isis attacks it.

Jane appears as a NPC in Victory, appearing in the solo mode Starlight Run. She only spawns in the Blight Swamp map, but has an 80% chance of appearing, standing by a mudfall when doing so. Jane's quest is to defeat a Green Hazzagrian. Once the Green Hazzagrian is defeated, the player teleports back to her for a Medium Defense Upgrade Drive and Bug Milk as a reward.

Being a swamp nymph, Jane has control over the elements in the swamp. She can manipulate water movement and control vines and other vegetation there. She is not limited to just the swamp, but has a harder time to do so outside of the swamp. She is skilled in making potions as she learned much of it from the local shaman.

Despite being a boss in the first game, she is a generally nice person who tries to help the heroes in any way possible. She cares deeply for the people of her swamp and doesn't want to leave them alone, thus using Hein and the others to get rid of the terror bestowed upon them. She looks like an innocent woman but does have a mysterious vibe around her. 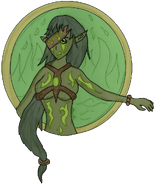 Jane in Fantendo Smash Bros. Victory.
Add a photo to this gallery
Retrieved from "https://fantendo.fandom.com/wiki/Jane?oldid=2421955"
Community content is available under CC-BY-SA unless otherwise noted.