Jake redirects here. You maybe are looking for Jake, Jake (Luck), Jake the Red Hyperspeed Yoshi or Jake the Koopa

Jake the Dog is the secondary protagonist of the Cartoon Network's Adventure Time, appearing alongside Finn. He is Finn's best friend, constant companion and adoptive brother. Jake has magical powers which allow him to change his shape and size. Jake and his girlfriend, Lady Rainicorn, both like to play the viola. He has personality between adventurer and simple householder.

Jake the Dog can morph into any shape thanks to his stretchy powers. Despite this, he tends to take form as an average-sized yellow dog with jowls. It is shown in the episode, Donny, that Jake wears transparent pants made of cobwebs that was spun by pixies. He and Finn appear in Futurama episode Leela and Genestalk as prisoners in dungeons, because Jake and Bender share their voice actor.

Jake, along with Finn, find that Ice King has been stealing their garbage. At first this is fine, until Finn and Jake learn that the Ice King is using their rubbish to make a Garbage Princess. The two travel across the Land of Ooo to stop Ice King.

Adventure Time: Explore the Dungeon Because I DON'T KNOW!

Jake is a mainstay in the Fighters of Lapis series, appearing in every game. He uses his stretchy moves to attack and turn into various objects.

Jake is co-protagonist of that game, alongside with Finn and Dexter.

Jake is the starting partner of Adventure Time: The Enchiridion Quest. Around the world, Jake can morph his body into different shapes to help Finn around the world. 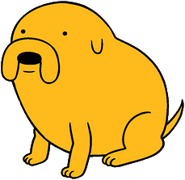 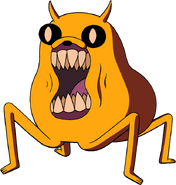 Demon Jake
Add a photo to this gallery
Retrieved from "https://fantendo.fandom.com/wiki/Jake_the_Dog?oldid=3303269"
Community content is available under CC-BY-SA unless otherwise noted.