View source
“Mario, you may have gotten this far, but your journey ends HERE!”
— Jackson, Super Mario Odyssey

Jackson Koopa is one of Bowser's thirty-three children, and the eight-youngest of them. He considers himself the "coolest" of the Koopalings, due to seeing him wear glasses.

He appears to have sunburn, thus turning his skin orange, He has a lavender shell with orange spikes. He is one of the only characters to have Multicolored eyes, And has blonde hair spiffed up like Larry. He also wears a blue vest.

His new appearance shows two red eyes. He still has blonde hair, but it has been styled differently. He now has a tuft, some bangs and more hair from behind. He also sports green sunglasses, similar to Roy's pink set.

Jackson is known for his love for music, carrying an electric guitar (which resembles a modified version of Diddy Kong's) in every battle from Super Mario Odyssey onward with him. Unlike his older brother, Ludwig, Jackson has a love for performing and has a tendency to be a Large Ham whenever he "rocks out". He has a positive relationship with Lavora, who gave him his guitar.

Unfortunately, Jackson's positive relationships end there. Jackson is known for being a pain to his father, particularly in his overconfidence, which is often his downfall when in battle with Mario. Jackson considers himself to be a ladies' man, and this seems to be true, as his battle in Super Mario Odyssey, has him surrounded by screaming fans, many of which seem to be female.

Jackson is extremely lazy as well. His trademark sunburned skin is said to have come from an experience for when he didn't feel like moving in the hot sun and was burnt, resulting in heavy berating from his father. Jackson is also not very fond of Bowser Jr., even creating his own personalized Clown Car from one that was given to Junior, causing Bowser to need to give Junior a new Clown Car. Jackson's Clown Car resembles the mass-produced model used by the other Koopalings, but his has lavender rims and propellers, with a lip ring unique to his.

Jackson has appeared a lot over the years in games.

Jackson made his Debut in New Super Mario Bros. All-Star Adventure, Being fought on World 9, Underground Path, Jackson is incredibly fast and jumps very high, and is very hard to catch on the Airship, he is defeated by being jumped on thrice without getting hit by his poison.

In Super Mario Odyssey, Jackson appears as the boss of World 3: Stage Island, He has his own section, named Jackson Hall. Jackson can strum poison notes from his Guitar and cause tremors that paralyze Mario using the drums. Jackson is seen again in the ending, helping his father up after being defeated by Mario.

Jackson appears in Mario Kart Tournament as an unlockable middleweight characters, his special item is the Poison Guitar. His siblings appear playable as well. Him, Lemmy, and Larry are the first Koopalings recruited in Story Mode.

Jackson was redisigned for Super Mario Exploit, now with a longer hairdo and sunglasses. He will most likely be a villain.

He appears to have a obsession for poison, as his magic is poisonous, and he is battled in a room with an acid pool. In later games, he can play the guitar and spring poison notes and play the drums and cause tremors, similar to Lavora.

Jackson is probally the most loyal of the Koopalings, but is extremely lazy and often turns down his father's demands.

Jackson Despises Mario in every way. Even calling him a "Good fer nothin plumber". 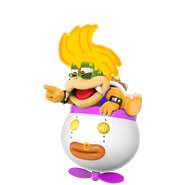 a sprite for him
Community content is available under CC-BY-SA unless otherwise noted.
Advertisement