Ivysaur are dual-typed Grass and Poison Pokémon Species and are the first evolutions of Bulbasaur. They evolve from Bulbasaur at level 16 before evolving into Venusaur at level 32. It is a Generation I Starter Pokémon. They are the second Pokémon in the PokéDex.

Ivysaur is a quadruped Pokémon that has blue-green skin with darker patches. On top of its head are pointed ears with black insides and it has narrow red eyes. It has a short, rounded snout with a wide mouth and two pointed teeth in its upper jaw. Each of its feet has three claws on them. The bulb on its back has bloomed into a large pink bud. A short brown trunk surrounded by leafy green fronds supports the bud.

The weight of the plant prevents Ivysaur from running fast and standing on its hind legs and forces its legs to grow sturdy. When its flower is ready to bloom, it gives off a distinct, strong sweet-smelling aroma and starts swelling. Ivysaur will also start spending more time in sunlight in preparation for its upcoming evolution. Exposure to sunlight adds to the strength of both Ivysaur and its plant. Ivysaur's natural habitat is plains. Ivysaur and its evolutionary relatives are the only known Pokémon capable of learning Vine Whip in Pokémon Sword and Shield.

Ivysaur is one of the victims of the Kirthar's Snap Finger.

Ivysaur is a playable character in Super Smash Bros. for the arcade. It is now a standalone fighter as the Pokémon Trainer is not playable. It has 8 palette swaps. 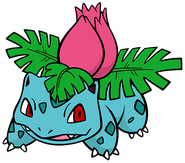 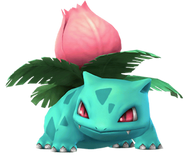 Ivysaur as he appears in Super Smash Bros. Brawl. 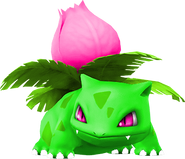 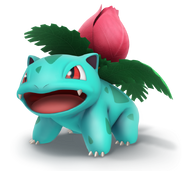 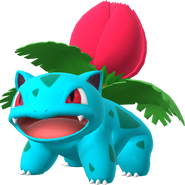 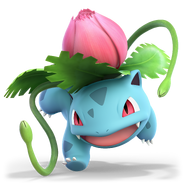 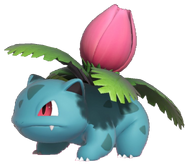 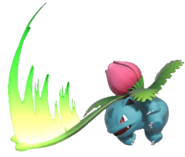 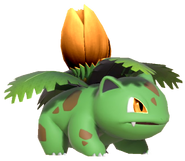 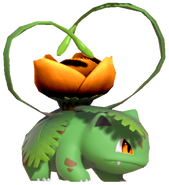 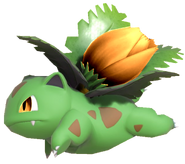