Ivan, alternatively known by his stage name, Ivan Indigo, is a Beorn of Zeonian descent currently residing on the Intergalactic Partybus. Ivan was born on Zeon, but, after leaving the planet on his own terms to pursue his musical interests, was “discovered” and hired by Jasper Jabberwocky, the eccentric host of a new interstellar game show, Deep Space Hullabaloo!; Ivan took up the job of singing the show’s theme song. After living on the Intergalactic Partybus for some time, Ivan fell in love with Jasper, and the two began dating.

Ivan‘s first canonical appearance is in Deep Space Hullabaloo!, in which he is introduced as the lead singer of the show’s official band, “Mindless Fun”, as well as Jasper’s longtime lover. Ivan, having left Zeon several years before the events of Fissure (2014), is blissfully unaware of his home planet’s destruction, as he’s been travelling around the galaxies for the past few years. While not a main character, Ivan's role in the story is fairly large, introduced to provide a friendlier face for the humans to interact with while stuck on the ship, and to give Jasper someone who sees the good in him, in contrast to the other humans and aliens onboard.

The character of Ivan was first conceptualized in mid-2016, but the character has changed drastically several times, in terms of his personality, origin, status in the story, and, to a lesser extent, appearance. His appearance in Deep Space Hullabaloo! was decided on after his creator wanted to both introduce a character with a close relationship to the main “antagonist”, Jasper, and reintroduce old character concepts that he had abandoned to the New Fantendoverse.

Ivan is a Zeonian Beorn, and takes on many of the physical attributes you’d see with them; largely speaking, the appearance of an exaggeratedly-detailed bipedal bear. Ivan is among the larger, stronger-built of the Beorns out there since Zeon’s destruction, with a body type similar to that of Boare's. His eyes are the typical Beorn fare; dark irises with star-shaped pupils, though his irises are notably colored more closely to a dark indigo, as opposed to dark grey or black, like others of his species. His fur, a mulberry purple color, is unkempt and thick, and he boasts sharp claws on his long limbs.

When initially introduced, Ivan is shown to typically wear a weighted green-white striped scarf. When on-camera for Deep Space Hullabaloo!, he’s seen wearing a light purple tuxedo, with a matching pair of dress pants and shoes, and a blue bowtie—his hair is notably slicked back in this state. He’s also often seen wearing a crimson ring with a star piece on its tip, a gift from Jasper.

At a glance, Ivan seems to be a fairly intimidating individual, between his wild, Herculean appearance and his commanding stage presence as a performer. Upon closer inspection, however, Ivan is a mellowed, amicable fellow, a friendly conversationalist with a fascination for unfamiliar lifeforms, especially humans. Ivan is utterly enthralled by human culture, and jumps at any opportunity to talk to the human participants of Deep Space Hullabaloo!; their wary nature and his tendency to come on too strong, however, can make things difficult.

When onstage, Ivan seems to have nothing but the upmost confidence, performing as if he hasn’t a care in the world. Secretly, however, he looks upon his physical appearance with disdain; he loathes his larger frame and how his appearance can scare others without him meaning to. All he wants is to not necessarily be loved, but to not be feared, either. As per his worries, he is quite fond of those who take him for who he is, rather than what he appears to be—particularly Jasper, who he has been in a relationship with for almost ten years.

Ivan has been in a romantic relationship with Jasper Jabberwocky for nearly ten years, having developed after Ivan was hired by Jabberwocky as a musician for Deep Space Hullabaloo!. After the two spent several years growing close to each-other, Jasper, in an epiphanic revelation, expressed his feelings for Ivan, and the two have been a tight-knit couple ever since.

Ivan is quite affectionate towards Jasper, and is more than comfortable in calling him his lover; the two make no attempts to hide their fondness for each-other, even when they’re vying for professionalism. Ivan is the only one aboard the Intergalactic Partybus who understands Jasper’s emotional “process”, and can calm him down when he’s on the brink of a panic attack. It’s clear that Ivan is one of Jasper’s few comforts in his otherwise hectic life, and Ivan is perfectly happy in that position. 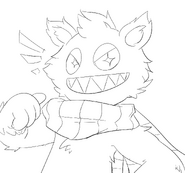 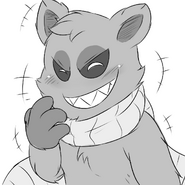 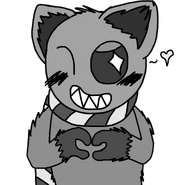 Pride Month themed sketch by Fuzzy.
Add a photo to this gallery
Retrieved from "https://fantendo.fandom.com/wiki/Ivan?oldid=3250447"
Community content is available under CC-BY-SA unless otherwise noted.