Item Shopkeeper is a character that debuted in Wario Land 4 as the shopkeeper. She resembles Mr. Game & Watch, with similar movement. She sells Wario items that can be purchased through Frog Medals. These items can used against bosses to make them weaker and easier to defeat. She was described as a "strange little dude", although she was actually a form of Princess Shokora, as her Black Cat form can be seen going into the Item Shop prior to Wario entering it, implying they are one and the same.

She resembles Mr. Game & Watch, with similar movement. She has white eyes with black pupils and a almost hidden nose; this nose is pitch black like the rest of her body. She can also can transform into various creatures to attack bosses.

When Wario purchases a item from her, she will then follow him to the Boss, where she will use the item he purchased against the boss to drain their health. She transforms into various creatures in the much more expensive items.

She can also play the bugle and use its notes to inflict damage. She also has a wonderful smile that comes at no charge.

Item Shopkeeper appears in the Boss Battles mode of Boss Battles, only appearing if the player decides to take on ten or more bosses. She hosts her small item shop in the resting area after the first boss fight, where the player can purchase her help in fighting against the bosses. She has all the options from Wario Land 4 and acts pretty much identically.

The Item Shopkeeper makes a rather prominent appearance in Jake's Super Smash Bros. due to her true form, Princess Shokora, being a playable character. For the princess' taunt and many of her attacks, including her neutral and side special moves, she transforms into her Item Shopkeeper form. 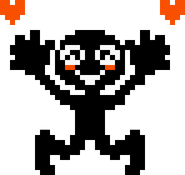 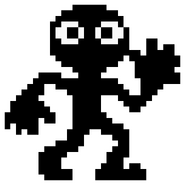 The Item Shopkeeper with a white outline around them 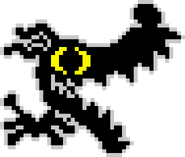 Item Shopkeeper as the Black Dog 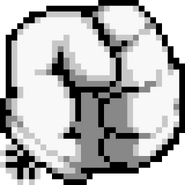 Item Shopkeeper as the Big Fist

The Item Shopkeeper as the Large Lips

Item Shopkeeper as the Black Dragon