Item Boxes are boxes found in the Mario Kart series. Item Boxes look like ? Blocks but are transparent and often multi-colored. When a character passes through them, they will get a random item.

Their precursor was the ? Panel from Super Mario Kart. Unlike their cubical variants, these flat, terrestrial ? Blocks can only be used once, and would remain deactivated until every single ? Panel in a race has been used. Regular Item Boxes will respawn two seconds after being picked up.

Fake Item Boxes appear as an item from the real item boxes, and can be used in a similar way to Banana Peels but has a bigger impact by making racers flip over instead of spinning out.

The earliest Item Box from Mario Kart 64 were rainbow-colored and bore a narrow, yellow question mark. In-game, they were translucent and shaped like an octahedron.

Mario Kart: Super Circuit made the Item Boxes more cube-like, with thin, silver question marks on each surface. The box was also rimmed with silver lines. Each side also bore a different color that changed constantly.

Mario Kart: Double Dash!! and Mario Kart DS included one of the most recognizable appearances. Here, the Item Box was crystalline, bore a checker pattern and had a thick, white question mark inside. Two of these three details remained part of subsequent Item Boxes. The Item Box was primarily cyan, but also flashed in many different colors.

Mario Kart Wii gave the Item Box a polka-dot pattern instead of a checker one. The box also was seemingly made of thicker glass and had rounded edges.

Mario Kart 8 gave the Item Box a slightly different polka dot pattern, made the question mark bigger and made the box primarily cyan and magenta. The box regained its glass-like texture from before.

The Mario Kart Arcade GP games feature the Item Box in a vastly different shape; instead of cubical, the Item Boxes are more hexagonal in shape. It's also the mostly flat surfaces that are transparent, while the rainbow-colored rims and edges are opaque.

The Item Box appears in every game in the Dry Bones Kart series and, like in the Mario Kart series, gives out a random item based on the current place of the racer who drives through it.

While the Item Box itself does not appear in Rowdy Relay, a similar item known as Item Presents replaces it. The Item Present uses a similar design to the Item Box, though takes the appearance of a translucent cube rather than a basic cube shape. Item Presents act in the same way as Item Boxes do in the Mario Kart series. 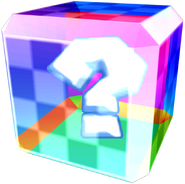 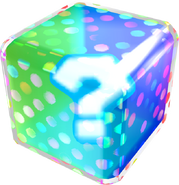 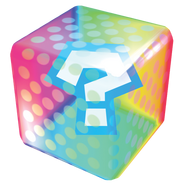 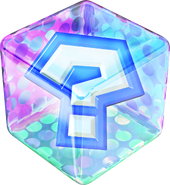 Add a photo to this gallery
Retrieved from "https://fantendo.fandom.com/wiki/Item_Box?oldid=3226160"
Community content is available under CC-BY-SA unless otherwise noted.