Isis is a major character in the lore of Dark Woods, although not making her first appearance until Dark Woods IV: Descend. She is the deity that truly reigns over the Dark Woods.

Not much is currently known about the history of Isis. She most likely was created before or along with the birth of Eden, but always has stayed on the background. She was worshiped by some people in Eden, but not many were believers. When Eden transformed into Dark Woods she lost most of her power and was reduced to her origin form and was sent to 'Gate' which is a purgatory for the Dark Woods.

Sometime before the events of the third and fourth game, The Threat was able to release Isis from The Gate. She came out in her origin form and was guided by Eight to the circus tent, saying that was a safe place for her to be in.

Isis first was seen inside of the circus tent upon the arrival of Hein and the others, along with other inhabitants of the Dark Woods. She appears in her origin form and was taken care of by the others, although nobody knew her, but did so nonetheless. Especially Lily seemed attached to Isis, often wanting to cuddle with her and in a strange way felt like she needed to protect her.

This was shown when Isis ran away from the circus tent. Lily desperately wanted to search for Isis and initially wanted to go alone but was joined by Rai. Isis had fled to the graveyard and entered the tomb of Lamia which was in the center of the graveyard. There she met with Eight who told her that it was time for her to start collecting souls to get stronger. Eight told her that she once was a deity of this place but that the people of this place turned it into this dark and rotten place and only she can fix it. The young Isis does so as Eight says and starts to collect the lingering souls of those in the graveyard.

Lily and Rai arrive at the scene and Lily asks why she had come her to which Isis simply replies that someone told her to go here. Lily embraces Isis in a hug, which might have not been for the best as her eye starts glowing red and breaks out of the tomb to the surface of the graveyard. Lily and Rai quickly head up to battle Isis. Against her will Lily has to fight Isis alongside Rai. After doing so Isis falls back in the tomb there Eight appears once again. Isis thanks Lily for releasing her from her weakest state and that she is going to collect more souls to strengthen herself. Eight comments that she will co-rule the Dark Woods at her side under The Threat. Isis then is told to go to the most secluded place and does so.

She goes to the top of the mountain where she calmly meditates in peace. Souls keep coming to her including those of Pan, Spine, Hollowing, Jaco and Chickember. She is confronted by Ashley and Ligeia who had come to stop her and fight Isis. Eventually Isis feels that it is time to collect her last patch of souls and departs from the battle and heads to the circus tent. She enters it and is questioned by Slime, but as answer kills him and collects his soul. She goes to the back to collect Plague Master's soul, but he won't allow her to do so and instead they fuse into one being. This fusion is battled by the heroes and Isis is pushed out of Plague Master, but took enough of his soul to let him revert back to a younger version of himself.

Isis says she finally has enough power and enters her Ultimate form, and goes completely crazy. She fights the heroes and is defeated by them. They manage to restrain her but that is when Eight appears. A discussion makes Isis realize that she has been on the wrong side all this time and apologizes. This makes Eight furious, she takes Isis away to Svarga where she gets restrained by Eight in order to charge up her powers to destroy the Dark Woods. Plague Master holds the portal open for the heroes to enter and defeat Eight and releasing Isis. She returns back to the Dark Woods and releases the souls she collected making her reverse back into her true form. She apologizes once again and is forgiven because she was misled. When The Enemy appears Plague Master tells that Isis is the deity of this realm, as she deserves. The Enemy acknowledges this and makes her an official deity of the New Fantendoverse. Isis goes on to rule the Dark Woods and keeps in contact with Plague Master and her fellow deity colleagues.

Isis appears in multiple forms. Each of her forms have a resemblance to the Eye of Providence, not to be confused with the Illuminati.

In her origin form she resembles a small pyramid like being with a pyramid on top of her head. She has one big blue eye with long eyelashes. Her limbs are black and she wears a necklace with a sun attached to it.

In her true form her head loses that shape of a triangle, although the pyramid is still on her head. Her right hand turns into a sun and her left hand into waves. She wears a black top and pants. She wears a golden necklace, bracelet and belt. In addition she wears pink transparent silk cloth covering her face, upper body and as skirt.

In her Ultimate form, the pyramid on Isis' head splits from her head and grows a third eye. A shining sun now emerges out of her head and shines behind her as if she were a saint. Her mascara gets thicker and her head is completely round now. Her entire body turns black and she grows two extra arms of which all four are ending with blue flames. She also grows a tail ending in waves with blue fire emerging from them. Her entire lower body turns into a black pyramid.

In her origin, true, plague master and ultimate form she has completely different personalities.

The personality of her origin form is, like her appearance, very childish. She acts like a 4-year old child who likes to get attention from others and is quickly misled. Because Eight convinced her to join their side in her origin form, she grew to believe it was right in her true form. Origin Isis has to be takes care of and needs to be watched as she will run away or do other crazy things when left unsupervised.

However her true form has matured a lot from her origin form. True Isis is calm and collected, she speaks in a soft and calm voice that really sounds lovely in her ears. She doesn't talk monotone as there certainly is emotion in her voice. She however keeps a straight face when talking. As she collected more souls one could clearly see she was slowly going more insane. When she was reverted back to her true form she was calm and collected again, but seemed a lot more cheerful as an addition, which made her a lot more fun to be around.

As said above her sanity slowly faded away as she collected more souls. Her plague master and ultimate form are pretty alike to each other. Once she transforms into those she completely loses her sanity she becomes an almighty goddess who feels superior over the other characters. She is not crazy in the sense of hysterical laughter, though she does do that, but rather feels like she has the almighty powers. In her plague master form she is sometimes supressed by Plague Master, who speaks to the heroes during the battle.

As the deity of the Dark Woods, Isis possesses many abilities. Her primary ability is to absorb energy and make it her own. When she was locked away it was because all of her energy was taken away as they were bits and pieces from the inhabitants of Eden. When taking energy from others she steals some of their powers but doesn't delete their powers forever. The more energy she takes the greater her power is.

She is also able to fuse with another being to completely claim that power for her own as she does with the Plague Master in Dark Woods IV. However when being separated from him, it causes Plague Master to become younger again.

Another ability of hers is to levitate in the air. She can do this in any form and basically never touches the ground.

The All Seeing Eye is the first weapon Isis has to her possession. This eye is her own regular eye which has the ability to shoot lasers and has psychokinesis, thus can lift things with a look from her eye. She however needs to be concentrated on that otherwise she'll drop it.

The Eternal Shining Sun appears in multiple forms. First as a necklace, then on her right arm and than as her saint circle. However they all have the same passive ability to heal her after a certain amount of time passes.

The Waves of Styx is her most melee weapon. She can use it to slash people with and enhance these slashes with, strangely, fire. The Waves of Styx grant her pyrokinesis with which she either enhances her attacks or use as projectile. In her true form the fire is orange while in her ultimate form they are blue and also emerge from her four hands. 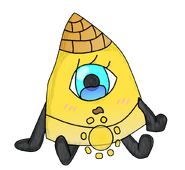 Isis when fused with Plague Master 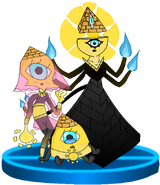 Trophy
Add a photo to this gallery

Retrieved from "https://fantendo.fandom.com/wiki/Isis?oldid=2362481"
Community content is available under CC-BY-SA unless otherwise noted.