Fantendo - Game Ideas & More
Register
Don't have an account?
Sign In
Advertisement
in: Free to use Characters, What is the New Fantendoverse?, Heralds,
and 9 more

Isenlore is a mirror-based Herald that is essentially a magic mirror that is capable of showing people their fates in other dimensions and timelines, as well as allowing them to preview outfits and show them things they want to see. The character was created by Helena Harper (t∣b∣c) as another example of a more unusual Herald, wanting to create more atypical character designs than the human ones seen previously for what were supposed to be characters that hopped around from universe to universe. This would be the second one after Remaka.

Isenlore is a friendlier Herald than most, although it still has its own dark sides. Many do not believe it has a proper consciousness, although it clearly moves on its own and travels from universe to universe in search of people that could use its powers. Whether those people use it for good or evil, it doesn't matter to Isenlore; all it cares about is being used to some extent. However, it absolutely abhors vain people who attempt to enslave it, often trapping them into a dimension that it had previously created with a Stenographer Stone. These dimensions are often filled with mazes and dark reflections of those who have gazed into Isenlore.

Isenlore on the onset appears to be a bunch of black and orange crystalline-shaped objects and cylinders attached around a giant steel frame mirror. Isenlore is often floating and spins around the subject sometimes for viewing purposes. Isenlore's mirror can be used to broadcast images of other universes, the past and future, or even images from other parts of the current universe, although can only do so if requested. Isenlore's mirror can also be used to create a portal into its own mirrored universes, featuring reflections of those it has previously seen.

Isenlore cannot speak, so much of its personality comes from the way it acts or moves. It is generally pretty curious about its surroundings, as it travels from universe to universe in order to have its powers be used. Isenlore does not seem to care what purposes their power is used for, except for vain purposes. Isenlore is very much disgusted with those who would rather enslave him to either look at themselves or attack others over appearances, and as such, entraps these people in their mirror dimensions. These dimensions are filled with dark mirror counterparts of everyone who has ever gazed into Isenlore.

Isenlore also seems to care much about their visual presentation to others, sometimes bonding themselves to the wall or morphing it's shape to better suit the environment. It also likes to spin around the gazer when showcasing a new outfit so they can get a better idea of what they look like. Isenlore is not a fighter, and would actually get wrecked rather easily in a fight.

Isenlore is a Herald, allowing it to create portals to other universes and allowing it to create universes with the Stenographer Stones. Isenlore features several abilities that have to do with what it's mirror can show, such as the future and past and other universes. It can also show what outfits would look like on anyone as long as it has a photo reference. It has a great memory and is capable of creating universes with twisted dark versions of the people that had previously gazed in it. It can also morph its shape to a degree and has the ability to float. It cannot create more mirrors- the Herald itself is strongly suggested to be just the mirror. 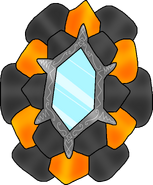 Isenlore as it appears in Convergence